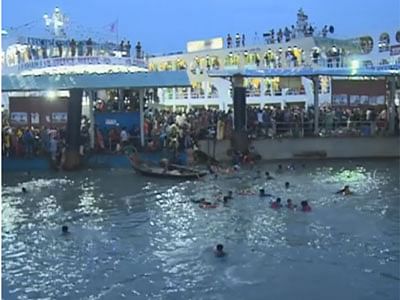 Prothom Alo   7 July 2020
Editorial Desk
Many years ago, Shamsuddin Abul Kalam, a renowned author during the Pakistan period, wrote an extraordinary story called ‘Jahajghater Coolie’. The protagonist of this story, a coolie, rescued a drowning child and won praise from everyone. But most of the passengers who drown in the accidents at Dhaka Sadarghat or other places cannot return alive.

According to the report of Prothom Alo published on Saturday, 23 people were killed in a boat accident at Sadarghat thana in Dhaka in 2019 and 13 in 2016. And 37 people have died in the first six months of this year, 34 of whom were passengers of the launch Morning Bird that sank last Monday.

The accident took place when a large vessel named Mayur-2 hit Morning Bird from behind. However, not all accidents are recorded in the BIWTA register, especially those who drown in launches, sand-carrying trawlers and ships or in small boats at night and whose bodies float away after a couple of days. Nobody even knows how they died.

The cause of the boat accident in Dhaka’s Sadarghat or the region is the chaotic operations of boats in the Buriganga, reckless movement, narrowing of waterways, people crossing in small boats, negligence of the naval police and indifference of the authorities. About 90 to 95 per cent of the people killed in the boat accidents at Sadarghat are small boat passengers. Passengers of small boats are injured when launches, trawlers and sand-carrying vessels collide.

Ensuring accountability is a must. Organisations involved in the work of BIWTA, including the naval police and the Ship Owners’ Association, need to be held accountable. If it cannot be ensured, the BIWTA and above all the Ministry of Shipping will have to take the responsibility for the death of so many people. There is no scope to blame anyone else.

According to the law enforcement agencies, the main reason for the boat accidents in Sadarghat areas is the negligence of the boatmen. The locals cross the river in small boats to go to Keranganj. About five hundred boats ply from Babubazar to Postagola every day. In addition, there is a dockyard on the opposite side of the Sadarghat launch terminal where a number of launches stand idle. This disrupts navigation and often leads to fatal accidents.

The question is when will order be restored at Sadarghat? How much longer do we have to wait for this? Bangladesh Inland Water Transport Authority (BIWTA) chairman commodore Golam Sadeq has said that effective steps will be taken to restore order at the launch terminal within a week. He also said that he would take initiative to remove the ferries, expand the launch terminal and increase the number of pontoons.

Everything that the BIWTA chief said was about future initiatives. We are accustomed to hearing such promises. Our experience is that most of these promises are never met. In this case, the real thing is to remove the obstacles. At the same time ensuring accountability is a must. Organisations involved in the work of BIWTA, including the naval police and the Ship Owners’ Association, need to be held accountable. If it cannot be ensured, the BIWTA and above all the Ministry of Shipping will have to take the responsibility for the death of so many people. There is no scope to blame anyone else.

Initiatives to stop the movement of small boats in the Sadarghat area have been taken more than once in the past but could not be implemented. We have to make sure that there will be an alternative for people to cross Buriganga. It will be sustainable if initiatives are taken to restore order under a specific plan.

Caught in their own trap!: Despicable decay of police ethics

Bangladesh on the brink: What it means for Canada