The key to a mutually beneficial relationship is one with equity. That requires a certain degree of sacrifice from the senior partner 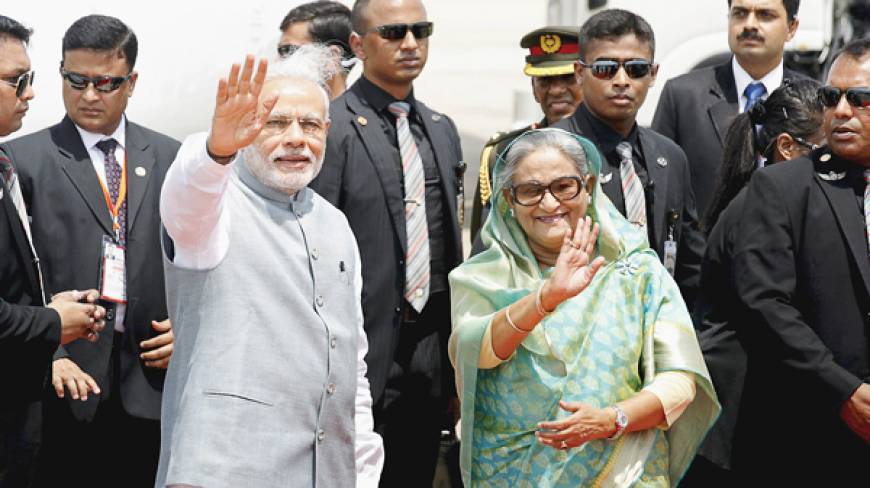 The euphoria surrounding Modi’s Dhaka visit is phenomenal at least, if one were to judge by media perceptions. The Indian prime minister reiterated this in a statement expressing that he was looking forward to this tour with a great sense of enthusiasm and delight. His cavalcade would include the West Bengal Chief Minister Mamata Banerjee, one of Modi’s staunch opponent till a few weeks ago. Mamata’s silly acts were also considered bottlenecks in the path to a better Bangladesh-India relationship.

Modi has been tirelessly touring the world and has covered 18 nations in one year, so much so that the Indian public fell short of calling him the acting foreign minister. However, this 19th trip is certainly going to be reasonably contrastive to the preceding ones.

More so, since Indian eudemonia is directly proportional to the political stability of this eastern neighbour with whom she shares a 4,096km long border — the fifth-longest land boundary in the world.

While Bangladesh welcomes Modi and Mamata, it is amply evident that both sides are hopeful about taking their ties to another level. The long-standing Land Boundary Agreement (LBA) bill passed by the Indian parliament barely three weeks ago gives both sides new sources for inspiration.

And it sets the stage for prioritising further increase of economic ties and connectivity. Though the Teesta water-sharing pact would certainly be an item missed in the menu, the Modi establishment is sparing no efforts to project its neighbour-friendly image.

It is assumed that this visit would largely deal with issues relating to financial aid, connectivity plans, new border markets, investments, enhanced security and defence cooperation, and a political message that genuine relationship with Dhaka is an essential facet of Modi’s foreign policy.

Could this much-hyped visit also be a game changer for Bangladesh-India equations? It is largely held that Delhi-Dhaka relationship has been a victim of India’s failure to take advantage of the favourable political conditions in Bangladesh, notably with Sheikh Hasina’s coming to power. No doubt that she has at times gone out of her way and has taken extraordinary political risks to rejuvenate mutual ties since 2008.

However, her efforts remain largely unrewarded in the absence of any substantive reciprocation from the Indian side. Bureaucratic inaction and lack of political intent in New Delhi has been the single largest roadblock for any sincere progress on long-pending bilateral issues.

Dhaka’s demand for the removal of tariff and non-tariff barriers on its products has largely remained unanswered. The development on Land Boundary agreement (LBA) has been extremely slow. The Teesta water-sharing agreement crucial to agricultural production in north-western Bangladesh is in a murky state. All these have provided arsenal to the opposing BNP and the Islamic forces who accuse the Awami League supremo of selling out to India.

The ground perceptions in Bangladesh are that of deprivation, denial, and negligence. Both, plebeians and the patricians equally feel that India is primarily keen to fulfill its own interests at the expense of Bangladeshi causes. A range of issues including cross-border river-water sharing, regular border killings by Border Security Forces (BSF), trade hindrances, non-exchange of enclaves, subversion of major treaty provisions by India, etc breeds multiple mistrusts.

While it is undeniable that unequal strengths do generate a sense of victimhood and suspicion from smaller partners which at certain times stray beyond rational domains, it can never be claimed that the Indian government exhibited ample sincerity to graciously address the pending issues and foster an amicable relationship.

The Bangladesh-India ties have lacked mutual trust and confidence for the last 30 years and this has severely weakened bilateral relations.

A number of steps need to be taken to address this adverse condition and paramount importance should be given to peoples’ initiatives from grassroots. It has clearly been observed in recent times that in spite of marked hostilities at the top, an amazing mosaic of camaraderie and solidarity adorn the “below.”

Unfortunately, such initiatives are limited, and do not impress upon the mainstream in the absence of any meaningful backing-up by the state and by society at large. The restrictions of visa and the complications of the visa procedure — primarily from the Indian side — make people-to-people contact even more difficult. Also, the absence of direct roads or railroads makes travel extremely troublesome, driving away potential travelers and tourists.

The people to people contact could be substantially improved by prioritising a few areas. The visa formalities ought to be eased, primarily for the people of Bangladesh and transport and communication across the border set up for the common people.

Random killings by BSF at the borders impact people’s psyche tremendously, along with other enormous consequences; this crime must be put to end without any delay.  Additionally, both tariff and non-tariff barriers must be done away with to facilitate free flow of goods and commodities across the countries.

Any meaningful development of Bangladesh-India relationship would also contribute to the process of South Asian regional integration which is another giant showcase of asymmetry — political, economic, and social.

Also, no purposeful partnership would evolve out of the current politics pursued by the Indian ruling class and can only contribute to the strengthening of the adverse status of centre and periphery within the region.

To make matters worse, India is not only big, but also centrally located. Therefore, any big-brotherly attitude is met with retaliation, although unequal. The key to a mutually beneficial relationship is one with equity. That requires a certain degree of sacrifice from the senior partner.

It is in this context that we have to judge the Modi government’s efforts and pronouncements.

We never lose friends, we simply learn who the real ones are

It’s a trifle lonely out there