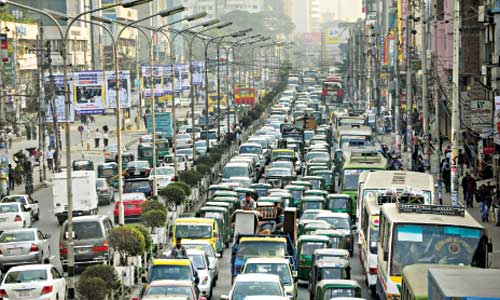 At least two more arson victims died in hospital and an auto-rickshaw driver was killed after a truck rammed the three-wheeler while trying to escape a petrol-bomb attack on Friday, the 18th day of the blockade enforced by the BNP-led alliance. [A spate of arson attacks on transports in Dhaka city and elsewhere at night left scores injured, 22 of them in a single incident at Matuail on the outskirts of the capital. All 22 victims with burns have been admitted to the DMCH burn unit till 11:00pm.] Two arson victims, including a child, lost their battle for lives in Dhaka Medical College Hospital after suffering burns in separate attacks on transports by suspected blockaders in Bogra and Savar. The third victim died in Sylhet.  Besides, nine more people were burnt and eight others suffered injuries in arson attacks on two public transports in Rajshahi on Friday night. So far 36 people have been killed during the blockade announced by Bangladesh Nationalist Party chairperson Khaleda Zia after the party was denied permission to hold rallies in the capital on January 5. Incidents of violence, including transport arson and vandalism and bomb attacks, were reported from Rajshahi, Munshiganj, Chandpur, Sylhet, Feni, Bogra, Sirajganj and different areas of Dhaka city on Friday. In the capital, traffic was as usual in the daytime but a spate of arson attacks on transports at night spread panic among the people. A small number of buses left the city terminals for outlying districts while trains continued to run behind schedules. The BNP-led alliance has called hartal in Noakhali district for today. Hartal was also called in Chittagong and Tangail for Sunday and in Bogra a 48-hour general strike from Sunday. Two transport arson victims died at Dhaka Medical College and Hospital on Friday. The diseased were identified as Abdur Rahim Morol, a trader from Satkhira and Zakir, whose details not available immediately. Abdur Rahim Morol, 35, who was travelling on a truck when it had come under attack in Bogra, died on Friday morning with 39 per cent of his body burnt. His co-passenger, Saju Khalifa also suffered burns in the attack. Saju said that the truck was heading for Pirojpur when blockaders hurled petrol bombs on it at Nungola in Bogra on Thursday evening. With severe burns, they were sent to DMCH where Rahim died at about 10:20am. Saju, a trader from Sibganj, suffered appalling burns to his face and back in the petrol bomb attack. He   was fighting for his life in the burn unit. His brother Ramzan Ali Morol said that Rahim was from Satkhira and survived by his widow, a son and a daughter. Eleven-year old Zakir succumbed to his wounds at about 1:20am after being transferred to DMCH from Savar Ganasasthya Kendra Hospital Thursday night, said DMCH residential surgeon Partha Sankar Pal. Locals had found Zakir with burns all over his body in Nabinagar of Savar. He was admitted to Ganasasthya Kendra Hospital on January 13 before being shifted to DMCH. Zakir with 70 per cent of his body burnt died around 3:00am, Partha said. The police in Savar, however, said the cause of Zakir’s burn injuries could not be established as yet as no incidents of arson attack at the place were reported on that day. New Age Sylhet correspondent reported that an auto-rickshaw driver was killed and two others were injured as a truck rammed it while trying to escape a petrol bomb attack by suspected blockaders in Sylhet on Thursday night. Locals blocked Dhaka-Sylhet highway for one hour until midnight to protest at the barbaric attack and killing, the police said. The deceased was identified as Shahjahan Mia, 30, son of Aktar Miah of Konapara village of Dakkhin Surma upazila, the police said. Locals said that pro-blockade activists hurled a petrol bomb at the Dhaka-bound truck at Badikona, some 3km off Sylhet city, around 11:30pm. The truck lost control after a petrol bomb hit its driver Niranjan Das and rammed the auto-rickshaw leaving its driver dead on the spot, they said. Shahjahan’s brother Helal, who was also in the auto-rickshaw, suffered grievous injuries in the incident, locals said. New Age Rajshahi correspondent reported that at least 10 people were injured as miscreants hurled petrol bombs at a bus at Tanore and at a truck at Paba in Rajshahi on Friday. Police said miscreants threw patrol bombs at a bus in front of the BRAC Bank branch in Tanore municipal area around 7.00pm. At least nine people suffered burns and eight others were injured while trying to jump out of the bus, said Alamgir Hossain, police super of Rajshahi. In the capital, an auto-rickshaw was set on fire at Demra in the morning leaving a passenger Liton, 32, burnt. Rapid Action Battalion detained one person with six crude bombs and gun powder at Rayer Bazar in the evening. Awami Prajanma League tried to besiege BNP chairperson Khaleda Zia’s Gulshan office in the capital on Friday afternoon. New Age Moulvibazar correspondent reported that miscreants torched a truck in Sreemangal upazila on Thursday night leaving a helper, Md Saijuddin, burnt.

‘24 killed in border areas in Jan-July’