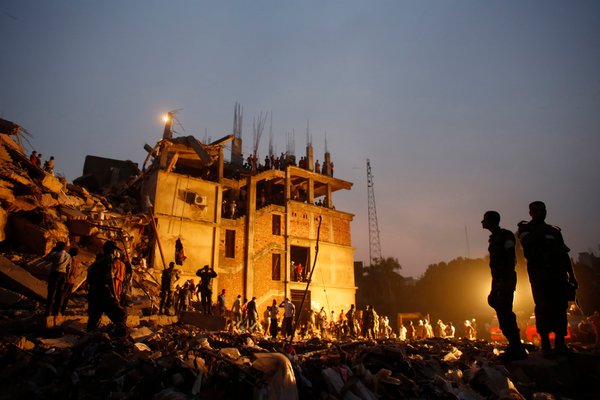 The collapse in April of the Rana Plaza factory building in Savar, Bangladesh, a suburb of Dhaka, left at least 1,129 people dead.

After several deadly factory disasters in Bangladesh — including the collapse of an eight-story garment factory last month that left at least 1,127 people dead — labor advocates are stepping up pressure on the Obama administration, calling for it to convey its disapproval of working conditions in the country by revoking its special trade status.

But federal officials remain conflicted over the American government’s responsibility for safer labor conditions overseas, and in meetings in recent weeks they disagreed over what combination of carrots and sticks would work best to achieve this goal.

Some officials, particularly in the State Department, say that if trade status is revoked, Washington will lose its leverage to pressure Bangladesh to improve building codes and labor rights. Labor advocates and officials from the Labor Department counter, however, that this leverage is lost anyway if the administration is never willing to use it.

“By failing to take serious action before now even in the face of phenomenal, unprecedented death of workers, U.S. trade officials have already sent the wrong message to Bangladesh,” said Brian Campbell, policy and legal programs director of the International Labor Rights Forum, a workers advocacy group. “It’s time to send a strong signal.”

Bangladesh is among more than 125 countries that receive breaks on United States tariffs under a World Trade Organization program, the Generalized System of Preferences, intended to promote economic growth around the globe. The United States trade representative is to decide the fate of the country’s trade status in June.

In meetings this month to discuss the disasters, officials from the State and Labor Departments agreed that Bangladesh had failed to improve labor rights sufficiently but they disagreed over what to do about it.

Some State Department officials argued that taking away Bangladesh’s preferential trade status would damage diplomatic relations with a country that has faced repeated Islamist threats and hurt its economy, which has lately averaged trade-fueled growth of about 6 percent a year.

Bangladesh’s garment industry does not enjoy American duty-free status, though other sectors in the country do. But State Department officials said that a decision by the Obama administration to scale back benefits might prompt foreign brands to reduce orders from the country. It might also lead the European Union, which does exempt the garment industry from tariffs, to revoke this status.

But Labor Department officials argued that more pressure was urgently needed. In December, American officials gave the Bangladeshi government a list of areas requiring improvement in order for the country to avoid losing its status. But there has been minimal progress, officials said. The list called for an end to government harassment of labor organizers and greater rights for workers in the country’s special export processing zones.

During these meetings, American trade officials also pointed out that under the trade agreement they are required to certify that countries receiving trade privileges meet certain eligibility standards, including the protection of internationally recognized worker rights, which are widely ignored in Bangladesh.

Federal labor officials also said the administration should publicly apply pressure on retailers like the Gap and Walmart to sign an international accord providing for a binding inspection program and mandatory improvements in workplace safety, according to officials who participated in the meetings but are not authorized to speak to reporters.

Many major European retailers have signed the international accord but most American retailers have cited liability concerns, opting to do their own audits of factory conditions. Eight Democratic senators wrote on May 16 to retailers including Wal-Mart Stores, Target and Kohl’s, arguing that this type of self-monitoring has proved to be ineffective and urging the companies to reconsider signing the accord.

Bangladesh mission warns against monopoly of workers by Malaysian company