A police official seen pouring water on the body of one the victims who was attacked by a suspected noxious substance on July 25, 2017

The locals were taken by storm after a video footage was posted online by Chris Lennon which showed a topless man pouring water on to his face as he is surrounded by five paramedics as a policeman watches on.

Two Bangali men have been targeted in a suspected acid attack in Bethnal Green in London.

However, details regarding their identities could not be ascertained yet.

Wishing anonymity, a shopkeeper said: “They were two Bengali boys who came into the shop. They had acid on their face and they were burning – their skin was peeling off.”

He said: “I think the boys had been attacked elsewhere and then got in their car and drove here to get water. Their car was outside.

“Their face and their legs were all burnt.” 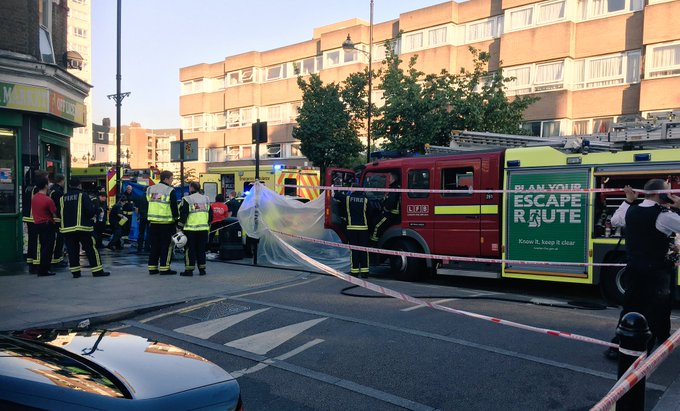 A spokesperson for the Metropolitan Police said: “Police in Tower Hamlets are dealing with a suspected noxious substance attack on two males in Roman Road, E2.

“Officers were flagged down in the area at 7pm on Tuesday by the two males who are believed to be aged in their late teens.”

The police official said: “Both have been taken to an east London hospital for treatment after an unknown liquid was thrown at them. Their injuries are not life threatening.”

The attack comes 13 days after five people were left injured in an acid attack in North and East London on July 13.

On Saturday, the Daily Mail spoke to a gang member, named ‘Off’, the people were choosing acid attacks over weapon attacks as the is no penalty for being caught in possession of acid-based chemicals as opposed to a knife or a gun.

Following the attack, West Midlands Police said they are issuing guidelines for dealing with corrosive liquids in accordance with national police policy and 1,000 acid relief kits were given to Met Office police officers.

Five litre bottles of water are now to be stocked in emergency patrol cars across London to provide vital and immediate treatment on the scene.

France launches first air strikes on IS in Iraq