Bangladesh have consolidated their position at seventh in the ODI rankings raising hopes for earning a direct berth into the 2019 World Cup.

The Tigers (91) lost a point in the rankings, but closely trail sixth-placed Sri Lanka (93) who dropped five points in ICC’s annual update published on Monday, after their home series against Bangladesh ended in a 1-1 tie.

Hosts England and other top seven teams will qualify automatically for the 2019 World Cup. The cut-off date for qualification is Sep 30.

The two remaining berths will be decided through qualifiers.

It means every forthcoming game is crucial for the teams ranked in the bottom half of the ranking table.

Bangladesh will take on Ireland and New Zealand in a tri-nation series, where losing to the lower-ranked Irish team will be costlier than defeat against the Black Caps. 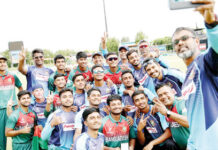