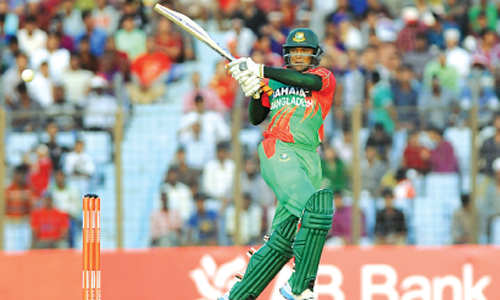 Sakib al Hasan returned to one-day international cricket with a stunning all-round performance leading Bangladesh to a crushing 87-run win over Zimbabwe in Chittagong on Friday.
Sakib scored 101 off 99 balls and followed that with 4-41 with the ball as Bangladesh scored 281-7 runs in 50 overs and later dismissed the visitors for 194 in 42.1 overs to take a 1-0 lead in the five-match ODI series and end their 12-match losing streak.
Opener Hamilton Mazakadza (42) and Sikandar Raza (15) gave Zimbabwe a good start putting 46 runs in seven overs, before Sakib put a brake on their innings with two wickets in an over.
Sakib grabbed two more wickets in his final spell, raising hopes of becoming the third cricketer in ODI history of scoring a century and taking five wickets in the same match.
But he failed to achieve it and set his name beside West Indian Vivian Richards and England’s Paul Collingwood.
Sakib was ably supported by new skipper Mashrafee bin Murtaza (2-33), Arafat Sunny (2-22) and Mahmudullah (2-40) as Bangladesh made regular breakthroughs to stifle Zimbabwe.
Mashrafee, who was at the receiving end of three successive fours in his first spell, gave the hosts the most important breakthrough when he removed Brendan Taylor on 54 runs.
Mushfiq was in the thick of action, taking a brilliant one-handed catch to help the new one-day skipper, as Taylor tried to glide the ball, only to be taken at the second slip, ending hope for the Zimbabweans.
Earlier, Bangladesh were in all sorts of trouble before Sakib came in to rescue them from the sight of an unexpected defeat against Zimbabwe in the opening game of the five-match series at Chittagong on Friday.
Sakib scored 101 from 99 balls to help Bangladesh come back strongly against the visitors to post 281-7 in 50 overs, despite being pushed on the back foot in the early part, struggling at 3-31.
Sakib put on a record fifth wicket stand with Mushfiq, amounting to 148 runs, to steady the ship, as well as end his four-year century drought.
The left hander made the visitors pay for not taking two half chances that he provided on individual four and nine runs respectively, at gully and short-cover, when the ball went inches over their heads.
But apart from those two mistakes, he played his innings mixed with caution and aggression, to showcase his ability. Sakib scored his last hundred against New Zealand in October 2010.
Meanwhile Mushfiq, who was lucky not to be caught on three occasions, made 65 runs, while debutant Sabbir Rahman scored unbeaten 44 runs to repay the faith selectors showed on him.
Mominul scored 31 runs to give some joy to the 15,000-strong  home crowd, as Tamim Iqbal failed to live up to expectations, making only five runs.
Source: NewAge