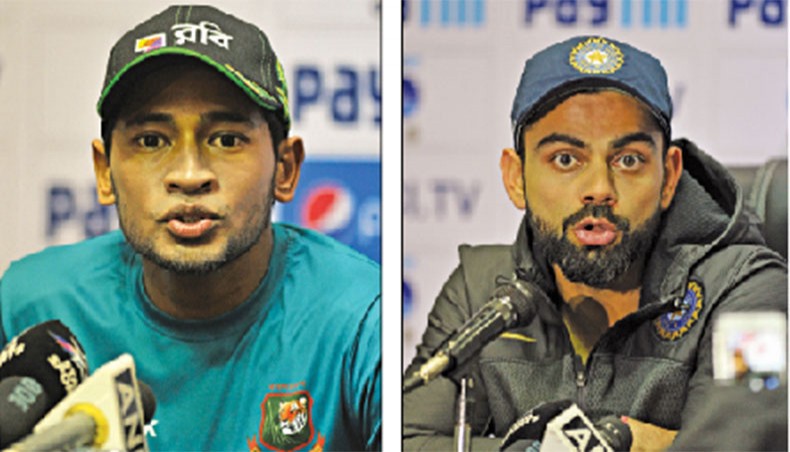 Anyone who had come to Rajib Gandhi Stadium early on Wednesday must had been curious looking at the pitch, not because of its greenish look but due to a ritual being performed around it.
A group of groundsmen was worshiping the pitch in the morning, apparently to wish hosts India good luck against Bangladesh in the one-off Test series beginning today at this ground.
The unusual worshiping of a cricket pitch can give an impression that India may be under pressure to win against Bangladesh, who will be playing their maiden Test in the county after a long wait.
But the reality is rather different as India will start the game as overwhelming favourites against Bangladesh, who, despite some success in recent matches, still appeared vulnerable in five-day format.
Local officials said Indian groundsmen had performed similar ritual prior to a Test match against England back in November at Visakhapatnam and the home side went on to win the game by 246 runs.
Anything other than a similar result in Hyderabad would be considered as an upset, though it made visitors Bangladesh very little concerned.
Skipper Mushfiqur Rahim and coach Chandika Hathurusinghe both suggested in their pre-match press conference that they would be rather happy doing the process right instead of worrying too much about the result.
The match against number one ranked side in their own den is likely to test the character of Bangladesh, ranked ninth in Tests, and the Tigers’ think-tank said they were busy in taking up the challenge.
‘If you play consistent cricket in Test levels all the questions will be answered and that’s one important area we are trying to work on. Our main focus is to play consistent cricket,’ said skipper Mushfiq.
Bangladesh played well in patches in recent Tests but lost the key moments, an aspect of the game, which Mushfiq said they must improve in order to avoid the fate that they suffered in New Zealand.
The Tigers, however, were relieved as they have very little selection dilemma with Soumya Sarkar taking the place of injured Imrul Kayes and both Mominul Haque and Mushfiq returning to their full fitness after missing out the final New Zealand Test.
One major dilemma was about including batsman Liton Das in the side as potential backup to wicketkeeper Mushfiq.
But coach Hathurusinghe all but ruled out the prospect as it would make him dropping at least one bowler.
‘The fracture is not like a muscle injury. You don’t expect it to comeback with the fatigue,’ Hathurusinghe said referring to the status of Mushfiq’s injury that made him certain to return to wicketkeeping job.
Hosts India also had big selection dilemma as they had to make a choice between consistent Ajinkya Rahane and last match’s triple centurion Karun Nair.
Skipper Virat Kohli made it clear that he preferred Nair over Rahane, who, according to the skipper averaged over 50 [49.84 according to stats] in the past two years.
Source: New Age