Thirteen people were shot dead as supporters of the Muslim Brotherhood clashed with police across Egypt on Friday, defying an ever-widening state crackdown on the movement that ruled the country until six months ago. 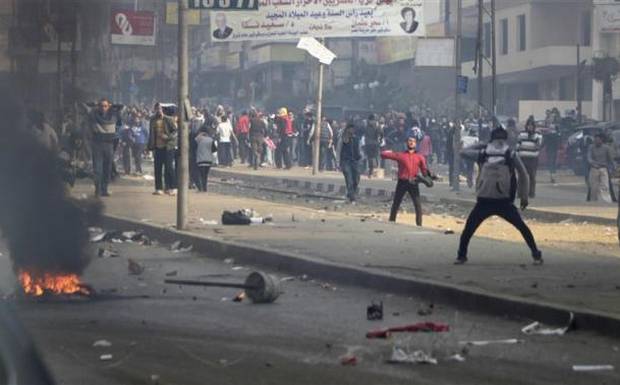 Islamists opposed to the army’s overthrow of President Mohamed Mursi in July have been holding daily demonstrations, even since the army-backed government declared his Brotherhood a terrorist group last week, increasing the penalties for dissent.

The government is using the new classification to detain hundreds of Brotherhood supporters. Thousands more, including top leaders of the group, have been in jail for months, arrested in the aftermath of the army takeover.

The crackdown has reduced but not entirely broken the ability of the Brotherhood to mobilize protests. It has lately been relying on students to sustain momentum against what it refers to as the “putschist regime” governing Egypt.

In the Cairo district of Nasr City, riot police in bulletproof vests fired teargas at protesters throwing fireworks and stones. Similar clashes erupted across the country, as has become commonplace after midday prayers on Friday, which is not a working day in Egypt.

The Health Ministry said five people were killed in different districts in Cairo. A security source said they died from bullet wounds.

One of the five was a man who was shot dead by the protesters after he yelled insults at pro-Brotherhood demonstrators marching near his house, the source said.

A male protester and a woman were shot dead in the coastal city of Alexandria, medical and security sources said. It was not clear whether the woman was a protester or an onlooker.

Two were shot dead by police in the Suez Canal city of Ismailia after a march set off from a mosque after midday prayers, medical sources said.

In the rural province of Fayoum, southwest of Cairo, three protesters, including a student, died from bullet wounds to the chest and head, local Health Ministry official Medhat Shukri told Reuters.

Another university student was shot dead during clashes in the southern town of Minya. The Health Ministry said 58 people were wounded nationwide.

Police arrested 122 Brotherhood members for possession of weapons, the Interior Ministry said in a statement. The Brotherhood says its supporters are unarmed.

The power of the Brotherhood – the country’s oldest and best organized Islamist movement – has been dramatically eroded by the arrests, the freezing of its leaders’ assets and the designation of the group as a terrorist organisation.

A new constitution to be voted on at a referendum on January 14-15 will also ban religiously based political parties and give more power to the military.

The army-backed authorities say the constitution will pave the way for a return to democratic rule by mid-year.

It would be a further step toward the complete removal of the Brotherhood from public life after winning every election in Egypt since autocrat Hosni Mubarak was overthrown in 2011.

Authorities have pledged to hold a secure referendum, despite the daily protests and frequent bomb attacks against the security services over the past months.

A conservative estimate puts the overall death toll since Mursi’s fall at well over 1,500. Most of those killed have been Mursi supporters, including hundreds gunned down when the security forces cleared a protest vigil outside a Cairo mosque.

About 400 police and soldiers have been killed in bombings and shootings since Mursi was ousted.

Four soldiers were wounded by an explosion caused by a roadside bomb apparently targeting a military convoy in the volatile North Sinai area, security sources said.

Most of the attacks on security forces have occurred in the Sinai Peninsula, which borders Israel and the Gaza Strip. But recent bombings in the Nile Delta suggest militants are widening their reach.

UK govt decides not to proceed with visa bond scheme