He may have called for a “total and complete shutdown of Muslims entering the United States until our country’s representatives can figure out what the hell is going on.”

While on the campaign trail, President-elect Trump may also have claimed – falsely – that thousands of Muslims in New Jersey “where you have large Arab populations” were cheering when the Twin Towers came down in the September 11 attacks.

That, though, does not seem to have stopped the prime minister of the country with the fourth largest Muslim population in the world from appearing to welcome Donald Trump with open arms and a fawning letter now he has been elected US President. 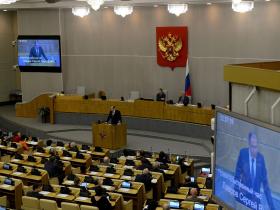 Either through genuine conviction or diplomatic necessity, Sheikh Hasina, prime minister of Bangladesh, home to 145 million Muslims, has wasted no time in congratulating Mr Trump and heaping praise on his “extraordinary leadership to serving the American people and global humanity.”

The letter, which follows United Nations protocol in addressing Mr Trump as “Excellency”,  cordially invites him and his wife Melania to Bangladesh, and pays tribute to “the warm, friendly people of the United States.”

There is no mention of Mr Trump’s campaign comments, the Islamophobia of some of his supporters, or the fact that delighted ex- Klu Klux Klan ‘grand wizard’ David Duke has claimed “our people played a huge role in electing Trump.”

“Excellency,” Ms Hasina’s letter begins, “On behalf of the Government and the people of Bangladesh, I convey our congratulations to you on your election as the 45th President of the United States of America.

“Your victory is certainly a testimony to your extraordinary leadership quality to serving the American people and also the global humanity. [sic]”

After expressing confidence that “under your leadership, the existing bilateral relations between our two friendly nations would be further strengthened,” the Bangladeshi prime minister adds: “I cordially invite you and Mrs Melania Trump to visit Bangladesh at a mutually convenient time and see for yourself the phenomenal development that took place in Bangladesh in the recent years.”

She signs off: “I wish you and your family good health, long life and happiness, and the warm, friendly people of the United States continued peace, progress and prosperity.

“Please accept, Excellency, the assurances of my highest consideration.” 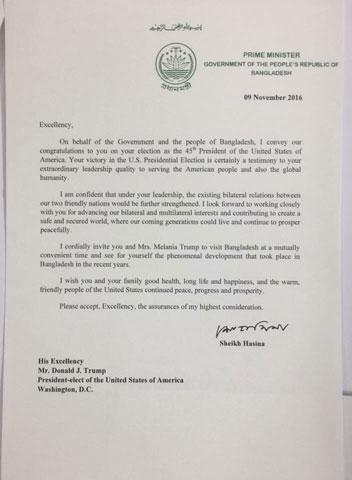 Trump’s rival Hillary Clinton also seems to have been warmly received by Ms Hasina when she visited as Secretary of State in 2012.  Ms Clinton’s visit was the first by a US Secretary of State since 2003 and reflected the growing ties with a country which the Obama administration saw as having a moderate Muslim population that had a role to play in demonstrating the alternatives to extremism.

In the same year, however, the leak of a cable from Ms Clinton’s State Department did expose some differences with the Bangladeshi government.

Written in 2010, the cable suggested that the war crimes tribunal set up by Ms Hasina’s ruling Awami League party to try suspects over alleged atrocities during the 1971 war of independence from Pakistan was also being used to crush political opponents.

Making claims that were subsequently denied by the Bangladeshi government, the cable, made public by Wikileaks, said “There is little doubt that hard-line elements within the ruling party believe the time is right to crush Jamaat-e-Islami and other Islamic parties.”

There were also tensions in 2013 when the Obama administration suspended trade privileges for Bangladesh in response to concerns about labour rights in the country after 1,200 people died in the Rana Plaza factory collapse, one of the global garment industry’s worst accidents.

Whether Bangladesh will fare better with “His Excellency Donald J Trump, President-elect of the US”, who was noticeably protectionist on the campaign trail, remains to be seen.