Rebels in Syria say they have launched a major offensive to capture a key airbase in the north of the country.

Video posted on the internet showed fighters attacking the Taftanaz base in an attempt to control a strategic zone between Syria’s two biggest cities, Aleppo and Damascus.

The attack comes a day before a crucial opposition meeting in Doha, Qatar.

It also follows the apparent murder of a number of Syrian troops by rebels, which drew international condemnation.

Separately, Israel said three Syrian tanks had entered the demilitarised buffer zone in the Golan Heights to tackle rebel fighters, prompting an Israeli complaint to the UN forces overseeing a truce in the area.

The attack on Taftanaz took place as dawn broke, with five different units of rebel fighters opening fire with multiple rocket launchers, mortars and other weaponry, according to the video.

The BBC’s Jim Muir, in neighbouring Beirut, says this appears to be a major operation aimed not just at striking the airport, but at occupying it.

In recent months, the government forces have been making increasing use of air power to strike areas held by the rebels, who lack anti-aircraft weapons to deter the attacks.

Rebel forces are reported to have taken control of the main roads in much of the area south-west of Aleppo.

Our correspondent says that although nothing certain has been established, al-Nusra has been named in connection with the killing of captured army soldiers two days ago at Saraqeb, just 15km (10 miles) from where this latest attack is taking place.

The UN has said the video that appears to show the murder of the soldiers or pro-government militiamen could be evidence of a war crime. 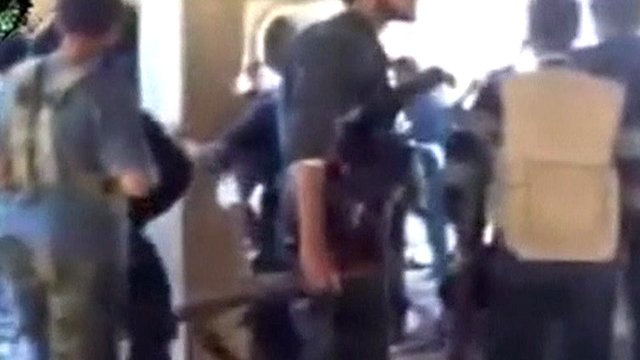 The footage shows gunmen beating and shooting a group of prisoners who were cowering on the floor.

On Friday, the US said it “condemned human rights violations by any party in Syria”.

State department spokeswoman Victoria Nuland said: “There is no justification for that kind of behaviour ever. Anyone committing atrocities should be held to account.”

The question of apparent brutality by some rebel units has become a serious concern ahead of the major opposition meeting being held in Qatar this weekend.

The US is hoping a new leadership will help unify the disparate opposition elements and bring a successful conclusion to an uprising that has killed more than 36,000 people since protests against President Bashar al-Assad erupted in March 2011.

Divisions have arisen not just between Islamist and secularist groups, but also between those operating inside Syria and opposition figures working abroad.

Ms Nuland said there was a need for cohesion of rebel forces within Syria and a strong organisation outside the country that could work with the international community.

A previous opposition meeting in Cairo in July accepted that the Assad government must fall but failed to appoint a committee to act for the opposition internationally.

The US this week signalled the opposition needed to be expanded from the main overseas grouping, the Syrian National Council, to take in more of those operating inside Syria.

Representatives at Doha will include various other religious and secular groupings, plus Kurdish figures and dissident members of Mr Assad’s Alawite sect.