At a time when “religious sentiment” is a topic of heated debate in the country, nearly three-fourths respondents of an opinion poll have agreed that the government should take action against those trying to incite violence using such issues.

The poll results also show that a significantly higher number of respondents are concerned with various developmental issues such as education and employment rather than issues such as stronger laws on hurting religious sentiments or holding free and fair election.

The poll was recently conducted by Bangla Tribune in association with the University of Liberal Arts Bangladesh (Ulab) and Innovative Research and Consultancy Limited (HRC).

It accommodated a total of 600 male and female adults from both rural and urban settings and collected mostly quantitative data through structured questionnaires by means of telephonic interviews.

The respondents were given several options and 20% chose education as the most important issue for Bangladesh right now, 16% chose employment, 14% law and order situation, 10.5% political stability and 4.3% road communication.

“Emphasis on religious sentiments” and “holding free and fair election” fetched only 1.09% response each; only 0.62% of the interviewees thought having “a neutral government” was the most important issue for the country.

When asked whether sacked minister Latif Siddique’s comment on religion hurt their feelings, more than four-fifths said yes. However, more than half of the respondents does not think Latif deserves capital punishment for what he has said. Interestingly, 41.6% said he should be hanged.

Interestingly, there was not much to choose from the responses when the interviewees were asked whether they agreed with the Awami League’s claim that the BNP and like-minded parties had been trying to take advantage of the Latif issue.

A vast majority of 77.37% respondents said Latif Siddique should be brought back to the country and tried for what he had said.

However, only 15.5% of them are fully aware of what the former minister had said about Hajj and religion. Television news, word of mouth and newspapers were the major sources of Latif-related news for the respondents.

The level of confidence of the responses was said to be 95% and margin of error 4%. The phone numbers were collected from a random computer generated list. 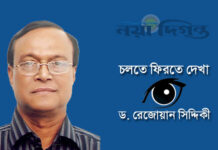 Fight Against Sexual Violence; Has anything changed after Nusrat?