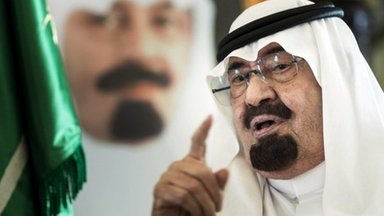 Abdullah bin Abdulaziz was the fifth of his brothers to take the throne and became king in 2005, reports Caroline Hawley

Saudi King Abdullah bin Abdulaziz has died, royal officials have announced, weeks after he was admitted to hospital.

King Abdullah, who was said to be aged about 90, had been suffering from a lung infection.

A statement early on Friday said his 79-year-old half brother, Salman, had become king.

King Abdullah came to the throne in 2005 but had suffered frequent bouts of ill health in recent years.

The official announcement from the Royal Court came as little surprise, but this is still a historic and sad moment for this deeply conservative Muslim country, home to the two holiest sites in Islam, at Mecca and Medina, and the world’s biggest oil exporter and producer.

As king he pushed through cautious reforms, including giving women a greater public role, against opposition from religious conservatives.

King Salman assumes the throne at a difficult time for Saudi Arabia. Having defeated an Islamist insurgency 10 years ago, the country now finds itself sandwiched between the growing threats from al-Qaeda in Yemen to the south and Islamic State to the north. Both groups have their sympathisers inside Saudi Arabia.

King Salman had recently taken on the ailing monarch’s responsibilities.

Before the announcement, Saudi television cut to Koranic verses, which often signifies the death of a senior royal.

The late king’s half brother Muqrin, who is in his late 60s, has been named the new crown prince, the official statement said.

All three are sons of the founder of modern Saudi Arabia, King Abdulaziz, usually referred to as Ibn Saud, who died in 1953.

King Salman called on the royal family’s Allegiance Council to recognise Muqrin as his crown prince and heir.

“His Highness Salman bin Abdulaziz al-Saud and all members of the family and the nation mourn the Custodian of the Two Holy Mosques King Abdullah bin Abdulaziz, who passed away at exactly 01:00 this morning,” the statement said.

Following tradition, King Abdullah will be buried later on Friday in an unmarked grave.

US President Barack Obama expressed his personal sympathies and those of the American people, on the death of King Abdullah.

“As a leader, he was always candid and had the courage of his convictions. One of those convictions was his steadfast and passionate belief in the importance of the US-Saudi relationship as a force for stability and security in the Middle East and beyond,” he said.

Vice-President Joe Biden tweeted that he would lead a delegation to Riyadh to pay respects.

UK Prime Minister David Cameron said King Abdullah would be remembered for his “commitment to peace and for strengthening understanding between faiths”.

Abdullah was the 13th of the 37 sons of King Abdulaziz. He is believed to have been born in August 1924 in Riyadh, although there is some dispute about his actual birth date.

In 1962 he was appointed commander of the Saudi National Guard, where he earned the respect and loyalty of the desert tribes.

When he came to the throne in 2005 he succeeded another half-brother, Fahd.

However, he had already been Saudi Arabia’s de-facto leader for 10 years because his predecessor had been debilitated by a stroke.

Correspondents say King Abdullah was seen as a reformer at home, albeit a slow and steady one.

He allowed mild criticism of his government in the press, and hinted that more women should be allowed to work.

BBC security correspondent Frank Gardner says it is thought unlikely that he will embark on any great changes.

In a recent meeting with the BBC in Jeddah, he appeared alert and well-briefed but walked with the aid of a stick, our correspondent adds.