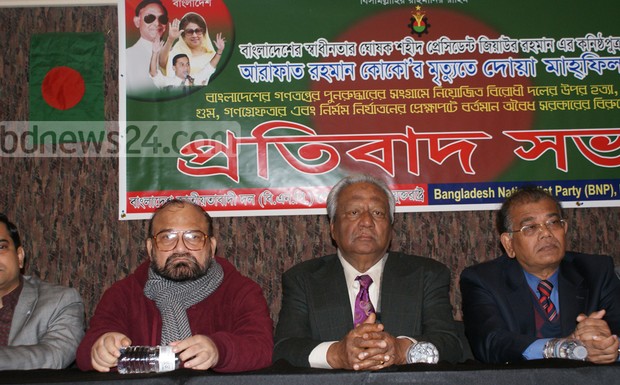 BNP Vice Chairman Sadeque Hossain Khoka has joined a function with Majibar Rahman Majumder, sacked for issuing a fake statement of US congressmen.

Majibar was seen on the dais beside Khoka and party chief’s Adviser Osman Faruk at a party function held at Pennsylvania on Sunday.

BNP leaders and activists in the US have expressed their displeasure over letting Majibar participate in the party meeting within a month of his dismissal.

On Jan 8, a false statement of about six US Congressmen, condemning the government for besieging BNP Chairperson Khaleda Zia and barring media from broadcasting Tarique Rahman’s statements, had been released to the media.

A few Bangladeshi media and some others in the US and the UK published reports, mistaking the fake statement to be authentic.

Two US Congressmen later reacted sharply and condemned the incident.

BNP leader Khoka, in a press briefing in New York on Jan 13, had announced the sacking of the special BNP representative Jahid F Sardar Sadi and special adviser Majibar.

BNP agrees or not, general election under new EC: Anisul