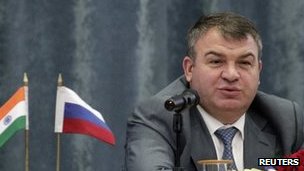 Mr Serdyukov had been defence minister for six years

Russian President Vladimir Putin has dismissed the defence minister after his ministry was caught up in a corruption scandal.

Anatoly Serdyukov has been replaced with a former emergencies minister and loyal ally of Mr Putin, Sergei Shoigu.

Russia’s top investigative agency is investigating the sale of ministry assets at prices below market value.

Mr Putin said he had removed Mr Serdyukov to create “conditions for an objective investigation”.

Last month, Russian investigators raided the offices of a state-controlled military contractor and began investigating the company amid claims that it had sold assets to commercial firms at a loss of nearly 3bn roubles ($100m; £62.5m).

It is one of Vladimir Putin’s principles of power: if you’re inside his inner circle and stay loyal, he’ll remain loyal to you.

Which is why the president’s decision to sack his defence minister is so extraordinary.

True, Anatoly Serdyukov had been under pressure. There is speculation in the Russian media that Mr Serdyukov had been in a relationship with one of the key suspects in the fraud case -allegations which seem designed to smear the now former defence minister.

Perhaps more crucially, his programme for modernising Russia’s armed forces by cutting jobs had met strong opposition within the military and outside it.

The head of the Russian parliament’s defence committee could barely conceal his joy at news of the sacking.

Growing discontent in the army would have been a major concern for President Putin.

Or did Mr Putin fire the minister to send a signal the Kremlin is serious about battling corruption? In the byzantine world of Russian politics, it is difficult to say. But one thing is certain: for Vladimir Putin, sacking a loyal minister is out of character.

Investigative Committee spokesman Vladimir Markin said Mr Serdyukov would be questioned in the probe “if there is a reason” for doing so.

Mr Serdyukov was a furniture store executive and head of the Russian tax service before being appointed defence minister in 2007.

The BBC’s Steve Rosenberg, in Moscow, says that in the six years that Mr Serdyukov was defence minister, he tried to reform Russia’s outdated armed forces by cutting costs and personnel and by boosting efficiency.

Under his reforms, there were big cuts in army personnel, and military assets were put in civilian hands. He also forced defence manufacturers to accept lower prices.

On the way, our correspondent adds, he made enemies in the armed services.

He also reportedly angered his own father-in-law Viktor Zubkov, who is a former deputy prime minister and currently chairman of the state-owned gas giant Gazprom.

One website with close links to Russia’s intelligence services claimed two weeks ago that when police conducted a dawn raid on a key suspect in the fraud case, Yevgeniya Vasilieva, they found Mr Serdyukov in her flat; that has led to speculation he was in an extra-marital relationship.

Why Asia should worry about Zika too

Trying to protect all in Rakhine: Suu Kyi