As Prime Minister Najib Razak prepares for ‘dirty’ war in lead-up to May poll, 1MDB cloud may dampen his dreams 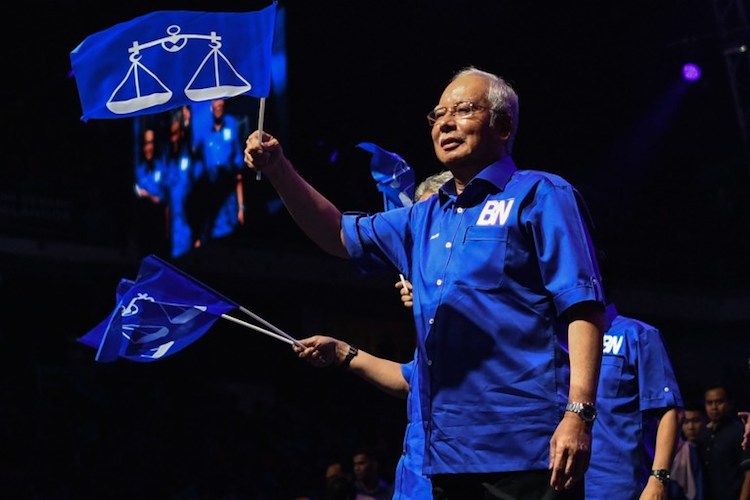 Malaysian Prime Minister Najib Razak waves his party’s flag before launching his coalition’s election manifesto ahead of the May 9 poll during a National Front coalition or Barisan Nasional rally in Kuala Lumpur on April 7. (Photo by Mohd Rasfan/AFP)

In most democratic countries a revelation that more than US$700 million had mysteriously turned up in its leader’s personal bank accounts would have seen them quickly tossed out of office.

But Malaysian Prime Minister Najib Razak has shrugged off the corruption allegations swirling around a sovereign wealth fund he set up in 2009.

Moreover, his United Malays National Organisation (UMNO) appears likely to emerge with the largest block of seats in the country’s 222-seat Parliament after the elections he called for take place on May 9.

Now pollsters, pundits and politicians are divided over whether Najib’s long-ruling Barisan Nasional (BN) coalition will be able to secure enough seats to establish a majority and form a government after the most contentious elections since the country gained independence more than six decades ago.

Crucial to the outcome are deep fissures in the politically dominant Malay community, where former prime minister Mahathir Mohamad, who is leading the opposition Pakatan Harapan alliance, has significant support, analysts say.

Mahathir was the architect of an affirmative action program that gave Malays preferential treatment in areas ranging from government jobs to university places.

Discontent with Najib has also simmered for years among members of Malaysia’s ethnic Chinese and Indian communities, as BN’s domination of politics has slipped over a decade.

The coalition was stripped of its popular vote from the elections in 2013 but was able to hang on to power though a gerrymandered electoral system that favors rural Malays.

Mahathir, 92, has warned the elections will be the dirtiest in the country’s history but insists the opposition has a fighting chance.

“There is no rule of law in the country,” he said as the elections were called.

Mahathir has agreed that if elected he would seek a pardon for jailed former opposition leader Anwar Ibrahim, thus setting him up as a potential successor for the job of prime minister.

Anwar is due to be released in June after serving a five-year sentence on what human rights groups say was a politically-motivated sodomy charge.

There are ongoing investigations in at least five countries into how several billion dollars were allegedly diverted from the 1Malaysia Development Berhad (1MDB) sovereign wealth fund, which Najib oversaw through his chairmanship of an advisory board.

Despite this, analysts say the hot-button topics in the campaign will be the country’s rising cost of living and the imposition of a good and services tax (GST).

There also appears to be growing sentiment against the federal government in the east Malaysian states of Sabah and Sarawak.

Even a slim victory for BN would undermine Najib’s position as prime minister and head of UMNO, sending the country into unchartered political waters at a time when it needs to establish new drivers of growth for its sluggish economy.

Najib, who claimed the money that arrived in his bank accounts was gifted from an unnamed Saudi prince, has used draconian laws to crush political dissent and freedoms in the multiracial country.

Malaysia ranks as Southeast Asia’s third-largest economy and has been a beacon of political stability in the region.

In the weeks before the elections were called, parliament drastically re-jigged voting districts to favor UMNO and passed legislation that made creating or circulating “fake news” punishable by up to six years in prison.

No matter what the result is on May 9, the U.S. Department of Justice will continue to build a case as it aims to seize $1.7 billion in assets that it claims was diverted from Najib’s 1MDB.

“For the prime minister, it’s either be re-elected or go to jail,” said Makhriz Mahathir, an opposition politician who is also Mahathir’s son.

“The stakes could not be higher for him.”