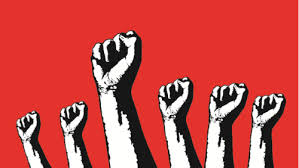 Bangladesh is going through a political turmoil which only Bangladeshis can resolve. Perhaps they should come out in droves and declare “enough is enough”, we want our country back to ourselves. “You politicians have destroyed the very fabric of the people’s representation system and now we will take it back from you”.

The system is designed in a way that we create a dictator for 5 years.  Now, it seems it will continue for as long as the present PM wants. We are used to pointing fingers but we never look at ourselves. We created these political creatures to rule us in a rude manner and as they please.  Isn’t it time to shake your pants and take your rights back?

The simple matter of electoral process cannot be managed by these governments. They treat the voters as though it is a football match between “Mohammedan versus Abahani”. The winner takes it all and become a ruler for 5 years and then try to fix the machine in way to succeed in the continuation of his/her rule. Bangladeshis claim they are not donkeys, they are yet to prove otherwise.

Even a country like Kenya with severe tribal issues and killings held a free and fair elections last year. They took help from the international observers. Why can we not do the same and fix our system once and for all. The election commission must be independent and not be under the whim of the present rulers just as is the case in Bangladesh. Once this machinery becomes fool proof, we have taken the first step in the right direction. Please do not keep circumventing rules by crooked means and using evil means.

It is extremely important to have the executive, judiciary and the parliament play their independent roles. In order to achieve this, we need to make the members of the parliament more independent to form their own views and if required, they should be allowed cross party lines. Simply clapping like a team is not why you were elected by the people. “Mohammedan Vs Abahani” pattern overruled.

The country should give power to the local elected officials instead of keeping it like a prize for the Members of the Parliament. The police can be de-centralized just like the USA and not like a colonial British system created for the benefit of the rulers. This can be done and should be implemented immediately. And one more thing, please do not politicize the civil servants. This institution should remain untouched by the evil hands of the political rulers.

Most important. The democratic process within the parties should be mandatory by the constitution. We are supposed to elect a representative of the people and not a “RULER”.

We are still working on a colonial mentality. The families rule just like Nehru family ruled India for so many years. But this also got reversed in India last year. Can we not do the same? Bring the power back to the people? Once the basic rules are implemented, we are ready to roll.

On a last note; please show magnanimity in pardons. Do not pardon the criminals but pardon political foes who played a wrong role in the past. It may not be easy to forget but we have the power to forgive just like what Bangabandhu Sheikh Mujibur Rahman did in 1971 when he pardoned the Pakistan Army criminals who violated every civil decency a nation could represent. Just like the Truth and Reconciliation Commission of South Africa, we should abandon prosecuting the war criminals if they admit their crimes and let’s go on with our lives. We have wasted a lot of time, energy and money in these prosecutions just for our deceptive politically motivated charades.

The Shahabag Movement and the media