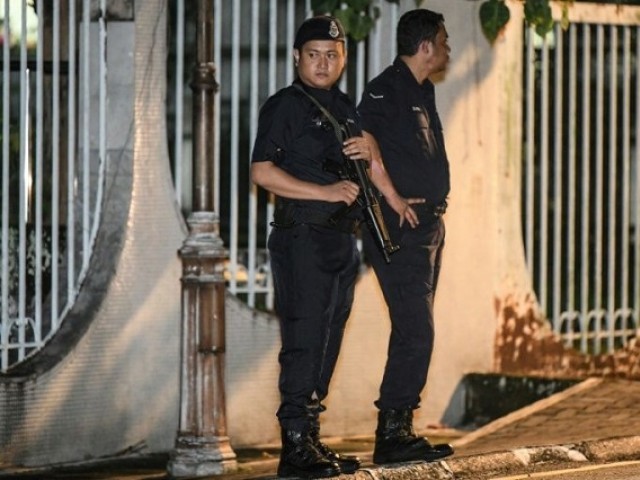 The unexpected result has been blamed in large part on public anger over the scandal involving the fund, called 1MDB. PHOTO: AFP

At least a dozen police vehicles converged on Najib’s family compound in the capital Kuala Lumpur, with a number of officers entering the home, an AFP journalist witnessed.

Police officials were not immediately available for comment on the nature of the operation.

But local media outlets quoted police officials saying a raid was under way over allegations that billions
were plundered from a state investment fund.

If true, it could be an ominous sign for Najib, who has already been barred from leaving the country and is expected to face prosecution.
Najib’s once all-powerful ruling coalition, which had governed Malaysia for six decades, was stunningly ousted in elections last week.

The unexpected result has been blamed in large part on public anger over the scandal involving the fund, called 1MDB. Najib established the fund and is accused of deep involvement in the looting. Nearly $700 million had appeared in his personal bank accounts while billions more are unaccounted for.

Former prime minister Mahathir Mohamad, who ruled from 1981 to 2003, came out of retirement at 92 years of age to spearhead the anti-Najib campaign and has found himself back in the country’s top post.

He has ordered that Najib, his wife Rosmah Mansor, and others linked to 1MDB be barred from leaving Malaysia pending investigations.

As word of the police presence circulated on social media, scores of journalists and citizens gathered at Najib’s home, where they remained well past midnight.

Mimie Lai, 45, said she came to “see what happens to the ex-prime minister and all the scandals… (involving) him and his wife.”

“I feel that finally justice is coming, somebody heard… what the people are praying for,” she said, adding that Malaysians wanted an end to widespread corruption that set in under the longtime ruling Barisan Nasional coalition.