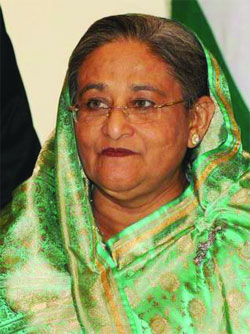 Prime Minister Sheikh Hasina has told the parliament hat BNP Chairperson Khaleda Zia will be tried for the deaths during her party’s violent blockade.
Several ruling Awami League MPs demanded prosecuting Khaleda during Tuesday’s Parliament session.
Hasina highlighted the aftermath of the blockade-related violence saying, “She (Khaleda) is going on killing people for personal reasons, not for national issues.
“She will be tried in the same way a killer is tried.”
Government figures show at least 27 people have been killed in blockade-related violence since Jan 5 when Khaleda announced the agitations.
The casualties are likely to go up after the BNP chief on Monday said the programme would continue.
The government says it will reward citizens if they catch saboteurs.
Opposition Leader Raushon Ershad earlier urged the government to take stern measures to prevent violence.
Awami League MP Sheikh Fazlul Karim Selim called for outlawing the BNP as a militant group.
“Arrest Khaleda Zia and try her for sedition and crimes against humanity,” he demanded.
Former law minister Abdul Matin Khasru and Food Minister Qamrul Islam were of the same view.
Hasina said: “What Khaleda Zia is doing is sheer terrorism… it’s not demonstration.
“There will be no place for militants in Bangladesh, we’ll uproot it.”
She said her government was showing restraint.
“We’ll do whatever it takes for the people’s safety,” the prime minister asserted.
Awami League MPs snubbed the BNP’s demand for a dialogue claiming the party was involved with terrorism.
They alleged its agitations were aimed at saving war criminals since most of the war crimes convicts are from the BNP and its ally Jamaat-e-Islami.
Commerce Minister Tofail Ahmed contended that Khaleda’s agitations did not have the people’s support as it was “against Bangladesh”.
Hasina, also the Awami League president, urged the people to thwart saboteurs.
“We cannot allow militants in Bangladesh… Everyone is living peacefully here… But some don’t seem to like it.
“I will not allow Bangladesh to become a militant state no matter what,” the prime minister thundered.

Sheikh Selim demands apology from Khaleda
Awami League presidium member Sheikh Selim on Tuesday said their party can sit in talks with BNP if its chairperson Khaleda Zia apologise to the Prime Minister for turning down her earlier call for dialogue.
“Khaleda Zia is staging a drama in the name of blockade and calling for dialogue. Talks are for what and with whom, anyway? You (Khaleda) have missed the train and it’ll never come to pick you up again,” he said.
He further said, “There’ll be no dialogue with you unless you apologise to Sheikh Hasina… and to people for rejecting her earlier call for talks.”
Selim was addressing a demonstration at Farmgate arranged by Uttara unit of Dhaka city Jubo League protesting the bomb explosions at organisation’s president Omar Farroque Chowdhury’s office and residence.
Referring to the growing incidents of violence in the 20-party’s ongoing blockade programme, the AL leader said, “I request the government to arrest the BNP chairperson if she kills any more people.”
He also suggested Khaleda to go back to her residence leaving her political office where she has been staying since January 3. “Go back to your home…our responsibly turns heavier to ensure your security when you stay outside your home!”
Chaired by Dhaka City north unit president Mainul Hossain Khan, the programme was addressed, among others, by Jubo League general secretary Harunur Rashid its leader Ismail Hossain and Zakir Hossain.

Maya demands Khaleda’s arrest
Advocating for the arrest of BNP chairperson Begum Khaleda Zia, Disaster Management and Relief Minister Mofazzal Hossain Chowdhury Maya has said she should be detained on charges of giving orders to carry out the terrorist acts taking place across the country during the indefinite transport blockade.
“It’s the demand of the time to arrest BNP chairperson as an ‘order-giver accused’, for inciting her men to kill people in arson attacks on transports,” he claimed while addressing a rally organised by Muktijoddha Projonmo League in front of the Jatiya Press Club on Tuesday.
Maya, also the general secretary of Awami League Dhaka city unit, urged the government to track down the criminals, including their mentor, engaged in the terrorist acts and take steps to give them exemplary punishment through trial.
Ruling out the possibility of midterm national elections as the BNP has been demanding, Maya asked the BNP chairperson to have patience and wait for the next general election till 2019 under the Sheikh Hasina government.
He was critical of the BNP chairperson’s political role, terming it another form of Bangladesh’s ruination. The relief minister said Khaleda Zia is “playing ducks and drakes” with the fate of the people.
Maya alleged that the BNP chairperson is doing all these evil acts with a mission to save herself and her son Tarique Rahman from Zia Orphanage Trust graft case and to protect the war criminals and turn Bangladesh into Pakistan.

Tuba workers to get 2 months’ salary on Wednesday