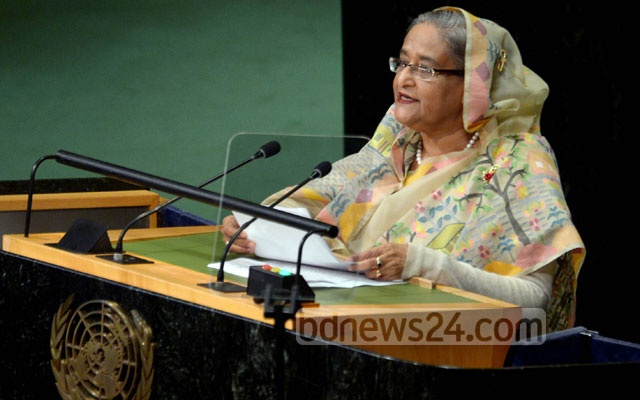 Prime Minister Sheikh Hasina’s return home from the US, where she attended the 71st session of the UN General Assembly, has been deferred.

The Prime Minister’s Principal Secretary, Abul Kalam Azad, said on Friday that she would nowleave the US for Bangladesh on Sep 29.

Sheikh Hasina left Dhaka for Canada on Aug 14 to take part in the Fifth Replenishment Conference of the Global Fund.

She later went to the US, from where she had been scheduled to return home on Sep 26 in line with her initial itinerary.

In light of the prime minister’s changed return programme, the ruling Awami League party has deferred the ‘mass reception’ planned for her, the party’s Joint General Secretary Mahbub-Ul-Alam Hanif has said.

Hasina’s son Sajeeb Ahmed Wazed Joy and his family live in Virginia. The prime minister will celebrate her 69th birthday with them on Sep 28.

The eldest child of Bangabandhu Sheikh Mujibur Rahman and Begum Fazilatunnisa Mujib, Sheikh Hasina was born in Tungiparha, Gopalganj, in 1947.