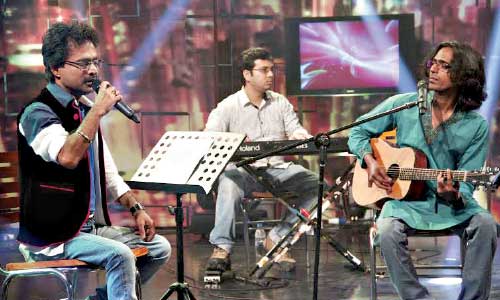 The increasing popularity of phono-live music shows has led television channels to plan a host of such shows for broadcast during the Eid festival.
These shows, in which a viewer can directly call the studio and request for a certain song, have grown in popularity over the past few years and become a common feature of television programming, attracting more and more singers as their ‘guests.’
However, there are controversies surrounding the quality and timing of live shows. ‘The shows are held late at night when there are not many viewers. It’s an injustice to the performers invited,’ said celebrated singer Kumar Bishwajit. ‘They also don’t pay well.’
Sumi, vocalist of popular band Chirkut, said she prefers prerecorded shows over live ones. ‘On a recorded show, you have more time to prepare and put up a better performance,’ she added.
However, Nawazish Ali Khan, advisor for programmes at ATN Bangla, argues that these programmes are favourite among viewers as well as the advertisement providers. ‘TV channels are business houses and we have to consider income generation when we design a show,’ he said.
Besides phono-live music shows, a number of prerecorded shows will be broadcast during this Eid festival in which popular and upstart singers will perform.
Maasranga TV will host a phono-live show at 11:40pm everyday as part of its six-day Eid-special programming. The show will feature singers like Hridoy Khan, Kanak Chapa, Rafa, Elita, Sayan and band Pentagon on different days.
ETV will air a musical show titled Ekushey Phono Live Studio Concert at 12:30am each day featuring singers including Araf, Polash, Badsha Bulbul, Sabbir, Shoshi, Sushmita and others.
Desh TV, on the other hand, has invited noted Indian artistes Ajay Chakraborty and Arati Mukherjee to perform live for its viewers. The show, titled Call er Gaan, will go on air at 9:45pm, on the second and sixth days of Eid, and accept requests for songs from music enthusiasts.
RTV will air a show titled Abong Runa Laila at 7:10pm on the third day of Eid. At the programme, Runa Laila will talk about her career with singers Shakila Zafar, Fahmida Nabi and Kona and also present her hit numbers.
A solo show featuring eminent singer Sabina Yasmin, titled Gaane Gaane Kichhukhon, will be aired at 10:45pm on the sixth day of Eid on ATN Bangla. Sabina will present her hit songs such as Eki Onar Aloy, Ami Rajanigandha Phuler Moto, Sudhu Gaan geye Porichoy and others at the show.
ATN Bangla will air Nochiketa Nights, a show featuring eminent Indian singer Nochiketa, at 10:45pm on the second day of Eid.
Other notable recorded programmes include Badhiya Rakhiyo, featuring Tagore singer Rezwana Chowdhury Banya, which will be broadcast at 5:30pm on Channel i on the Eid day.
NTV will host a music show featuring contemporary singers Balam, Arnab and Rumi at 9:15pm on the second day of Eid.
On the other hand, noted artistes Samina Chowdhury and Fahmida Nabi and upstart singers Antora and Pancham will perform in a musical show titled Surer Bhuvone, which will be aired on NTV at 5:30pm on the second day of Eid.
Besides, Desh TV will air a musical show on Eid day, titled Nandito Narake, featuring songs written by late writer-director Humayun Ahmed. The songs will be presented by veteran singers Subir Nandi and Bari Siddique.
Source: New Age

Jahid is back with new songs