Bangladesh’s people will determine when its next national election will be held, the top US official for South and Central Asia has said. 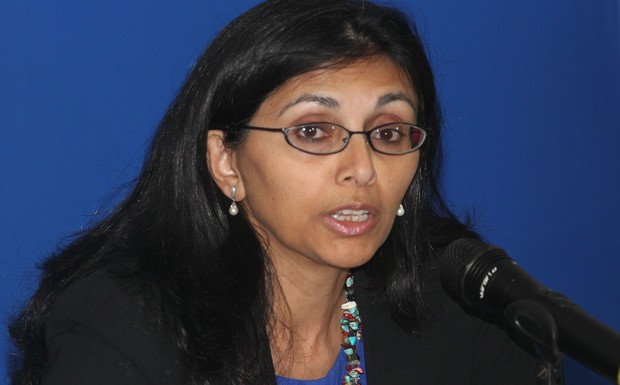 “We have continued to advocate a strong and inclusive democracy and we will continue to work with Bangladesh,” she said on Saturday at a press briefing before leaving Dhaka after a three-day tour.

She came here after attending the SAARC summit in Kathmandu where she represented the US as an observer.

It was her second visit in a year’s time as Assistant Secretary of State.

Last November she made her first trip to Dhaka just before the Jan 5 election that the US said “was not credible”.

The US then also called for a fresh election as soon as possible with an agreed poll-time dispensation over which BNP had boycotted the polls.

However, she skirted a direct reply to a question on the latest US position on the polls. On Friday, she reportedly asked Raushon about timetable for the next election.

“….in terms of elections it is for the people of Bangladesh to determine the time-table.”

“I would say we are very focused on how we can move forward the relations in many areas that we think are important areas of convergence between the two countries”.

Replying to a question on what she discussed with the BNP chief, Biswal said: “Wherever we go, we always meet with the government and the opposition. That is a home work for democracies.”

“We do believe Bangladesh’s strength as a nation is its democracy and we are committed to partner Bangladesh in that.”

She said during her meetings she had expressed the US support for political dialogue and “we also stressed on the responsibility of all political parties to use political space responsibly and peacefully”.

Biswal, however, expressed concern over the reports of extrajudicial killings and violation of human rights and called for the due process and investigations.

“We think it’s very important that the government of Bangladesh works seriously to ensure that institutions act with accountability and that there is due process for any cases of criminal activity.”

She said her visit to Bangladesh came at a “critical time” as it was just after the SAARC summit where all leaders spoke on connectivity, trade and investment.

The US point person for south Asia recalled her meeting with the foreign minister and said she had conveyed that how the Secretary of State John Kerry was looking forward to the minister’s visit to Washington.

She said Bangladesh was “an important partner” and it was not for bilateral relations alone. “We can do a lot together for democracy and addressing regional and global challenges.”

The US assistant secretary of state said the visit gave her an opportunity to discuss the issue “across the broad range of partnership” to address challenges in the areas of heath, environment and agriculture.

“Bangladesh has done so much and we want to see the progress continue.”

She, however, said during her speech in the SAARC summit she told the South Asian leaders that for ensuing peace and prosperity “it is not just enough to have economic development and economic connectivity”.

“It is also important to have resilient democratic institutions such as transparent and accountable governance, and economic and political system that will be inclusive and growth strategies that are environmentally sustainable.”

Biswal also recalled the recent US-Bangladesh partnership dialogue that Bangladesh’s foreign secretary led and termed that dialogue “a very robust” one. She added that her visit was also continuation of that dialogue.

“…we found many areas of convergence of shared goals where we wish to deepen and strengthen our relations and this visit is a continuation of that dialogue.”

According to her, the partnership with Bangladesh is also “very important” for countering terrorism in the region.

She praised the outgoing US ambassador in Dhaka Dan Mozena, saying he had been “a tremendous and passionate advocate” of US-Bangladesh relations.

Biswal hoped that his successor would continue that “very strong and passionate advocacy”.

The assistant secretary said she was supposed to join Prime Minister Sheikh Hasina for the inauguration of the Bibiyana gas transmission system at Habiganj on Saturday.

“…my logistics prevented me from going there,” she said as she would fly to Uzbekistan in the evening.

“I look forward for engaging with the prime minister in the future as well”.

US ire over Dhaka’s Crimea role

A raw deal from a friendly neighbour