‘I think he [Mashrafee] is definitely in the series against Zimbabwe. If he is not fit that is another issue,’ Nazmul told reporters at the Sher-e-Bangla Stadium in Mirpur after a meeting with senior players.

‘At this moment we don’t have a substitute for a captain like Mashrafee. I have always said this. In Mashrafee’s case, we need to keep in mind that we are making some changes in our cricket. Like we didn’t have beep test earlier. We have introduced it now. Mashrafee may not pass the beep test.

Mashrafee has not represented Bangladesh in any ODIs since their first round exit from the ICC World Cup last year in England.

Mashrafee, who has already retired from Twenty20 internationals and has been exiled from Tests for over a decade, also missed out on the Sri Lanka ODIs right after the World Cup for a last minute injury.

Questions were being asked about the aging player’s position in the ODI side, and Mashrafee also hit back by leaving his retirement call up to the national selectors.

But Nazmul cleared the air by assuring that the 36-year old pacer will end his near seven-month break from international cricket by taking up the leadership mantle once again against Zimbabwe.

Nazmul, however, said that the board realised that Mashrafee was not a viable option to lead Bangladesh in the 2023 World Cup and the BCB was likely to pick his successor in the next month’s board meeting which will be held at March 8 or 9.

‘We have to decide about our next captain very soon keeping the World Cup in mind. Because we can’t play there under a new captain. We need to choose both the team and the captain two years prior.

‘We don’t have much time. We have to make the decision quickly. I think we can take final decision within one month. We will be waiting till this series. Then we will take our decision,’ Nazmul said.

The BCB boss, however, didn’t shut the door for Mashrafee completely for a place in the national side, saying he can earn his place in the side through his performance.

‘If he wants to play without being captain he can. We are not refusing him. But we can’t guarantee that he will get into the side. He will have to prove himself before playing for the national team,’ Nazmul said. 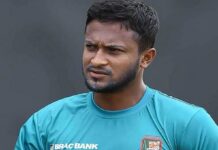 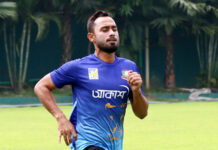 Shakib: This can be start of a new chapter for us