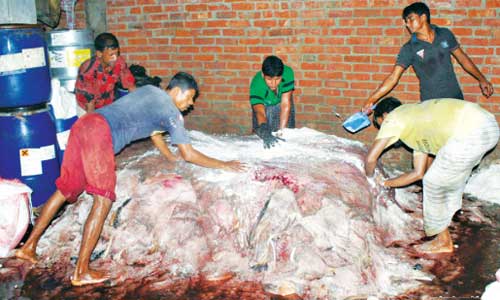 Experts and entrepreneurs on Saturday said that the government and businesses should take immediate steps to enhance productivity and value addition in the leather sector to explore huge untapped international export market. Tanneries should also be environment-friendly and should fulfil other compliance issues to keep protected its global market particularly in European Union, they said. They also emphasised on ensuring political stability for the growth of the sector and the overall economy. At a seminar on ‘leather and leather goods: next to RMG’ organised by the Board of Investment in a city hotel, they also said that tannery owners should relocate their factories from the city’s Hazaribag to the Tannery Industrial Estate at Savar within the stipulated time. The sector has all the potentials to grow like the RMG sector based on locally available raw materials mainly raw hide, they said. According to the industries ministry, tannery owners will have to complete relocation of their factories to Savar by March this year. Officials, however, said that the relocation of factories by the deadline seemed impossible as only 40 out of the 155 factories located at Hazaribag made some progress in construction work of factory buildings at Savar. ‘Bangladesh exports only 0.56 per cent of the annual global leather and leather goods market of $230 billion,’ said Saiful Islam, senior vice-president of Leathergoods and Footwear Manufacturers and Exporters Association of Bangladesh. He said that entrepreneurs could hardly use 40 per cent of productivity mainly due to lack of skilled manpower, advanced technology, infrastructure and funds. Average value addition in the sector in the country is only 85 per cent while the highest global value addition for leather goods is 200-250 per cent and for leather footwear 60 per cent, he said. ‘We need a policy on how to go for higher value addition in the sector and creation of skilled manpower to achieve the target of $5 billion export earnings by 2018 from $1.29  billion in the last fiscal year of 2013-2014,’ he said. Sobur Ahmed, a teacher of leather engineering and technology department of Dhaka University, said that the government and entrepreneurs would have to improve the situation regarding lack of skilled manpower, research and development through setting up skill development institute and training centre. Improving environmental and compliance issues is also similarly important to keep intact international market particularly European Union which has been threatening to stop to buy goods from Bangladesh on environmental issues, he said. At the seminar, industries minister Amir Hossain Amu threatened the factory owners that the government would cancel the plots allocated for them if they fail to relocate their factories within the deadline. ‘If any factory remains at Hazaribag after the deadline, it will be demolished,’ he said. Tannery Industrial Estate project director Sirajul Haider said that 148 factories had started construction works. Of them, only 40 units have started construction of superstructure while 39 factories have constructed only boundary walls and guard sheds, 43 have constructed only boundary walls and 22 factories have constructed only guard sheds, he said. Food minister Qamrul Islam, parliament member Abdur Razzaque, BoI executive chairman SA Samad, NBR chairman Nojibur Rahman, commerce secretary Hedayetullah Al Mamoon and BoI executive member Nabhash Chanda Mandal spoke, among others, at the seminar moderated by Afsor H Uddin, chief executive officer of the Public Private Partnership Office.

Five steps to put the RMG sector back on track