Khandker Mosharraf Hossain, after taking charge of the LGRD and co-operatives ministry, says he went to the residence of his predecessor Awami League General Secretary Syed Ashraful Islam to get his ‘sanction’. 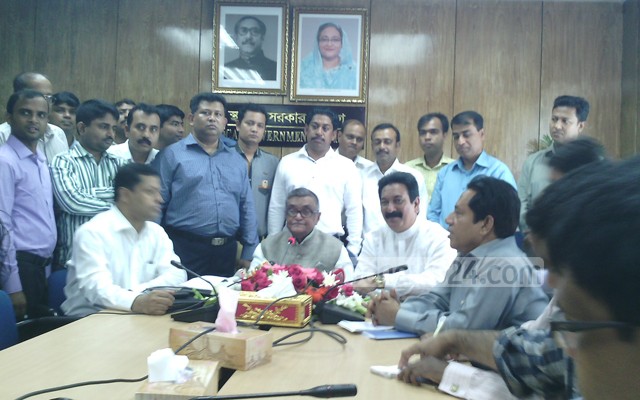 “I paid a courtesy call on Syed Ashraf. He is the leader of my party, the general secretary,” he told reporters at Sunday soon.

“I went to seek his approval. I asked him whether I should join,” the minister said after a 15-minute meeting at Syed Ashraf’s Bailey Road residence.

Syed Ashraf said, “We serve the same government, are members of the same parliament. There has to be cooperation between us.”

Prime Minister Sheikh Hasina last Thursday removed Syed Ashraf, virtually the number two in the ruling party, from the ministry but kept him in the Cabinet without portfolio.

Cabinet Secretary Muhammad Musharraf Hossain Bhuiyan had said Mosharraf will continue in his role as the expatriates’ welfare and overseas employment minister “for the time being”.

Long known to be a trusted lieutenant of the party chief, Syed Ashraf has come in for criticism in his party for skipping important meetings.

However, his sudden removal from the LGRD caused a stir over the last three days, generating endless speculations.

Syed Ashraf is the son of Syed Nazrul Islam, Bangladesh’s acting President during the 1971 Liberation War.

He was brutally murdered inside the Dhaka Central Jail on Nov 3, 1975 along with three other national leaders after the assassination of Bangabandhu Sheikh Mujibur Rahman on Aug 15 the same year.

“I’m not in politics to make a fortune for myself… My father was an honest politician and gave his life for the leader (Bangabandhu),” he said on Saturday.

After the meeting, Khandker Mosharraf went to the Secretariat, where he was greeted by officials of the LGRD and cooperatives ministry. After taking charge, he held a two-hour discussion with them.

Mosharraf later told journalists, “I feel fortunate that the prime minister has given me the charge of this ministry. I want [your] help to carry out the task.”

He also said meeting Ashraf was a ‘party matter’ and urged journalists to see it ‘that way’.

Mosharraf said 80-85 percent of Bangladesh’s population still lived in rural areas. So, the government would be able to make the country a higher middle income one by 2021 and a developed country by 2041 without development.

Immediately after being entrusted with the ministry, Mosharraf had claimed at a programme in his Faridpur constituency he had rid the expatriate welfare ministry of corruption and wanted to do the same with the LGRD ministry.

But, on Sunday, when asked about it, he said, “I did not mean the LGRD ministry was corrupt. Journalists asked me what I will do if there was corruption. And I said if it was there, I will get rid of it.”