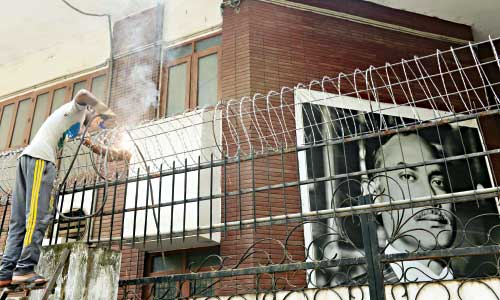 Cylindrical iron and steel barbed wire fence have been set on the boundary walls of BNP chairperson Khaleda Zia’s Gulshan office on Monday, where she had been staying since January 3, to strengthen ‘security’ to the office.
The north and west sides of the office, located at Road number 86 of Gulshan-2, faces roads, while the east and south sides are backed by two others buildings.
The barbed wires, which were brought to the office Saturday evening, were set up on the boundary walls facing the road.
BNP chairperson’s media wing staff Shamsuddin Dider, who is staying in the Gulshan office, said the wires were set up to strengthen security to the office.
‘Two unidentified men tried to climb over the wall to go inside the office day before yesterday [Friday] and today [Sunday]. The measure was taken so that no miscreant can enter the office climbing over the walls’, Dider said.
Khaleda Zia has been staying at the office since January 3 starting with the government holding her confined there.
The government on January 19 withdrew the riot police, pick-up vans and water cannon, which were posted around the office.
The former prime minister has remained incommunicado since January 31 as the office’s telephone, cell phone, internet and satellite cable connections were cut off.
Members of the special branch continued monitoring visitors to Khaleda Zia’s office setting up a booth at the main gate of the office. They were listing the visitors, including journalists, in a registrar book, with details of identity and reason for visit to the office.
No party leaders or activists, however, entered the office since February 2 after Khaleda Zia’s adviser, Modaddak Ali Falu’s arrest from the office gate.
Source: New Age