Preparations were underway to bring Khaleda, who is suffering from arthritis and various other medical issues, to BSMMU for treatment but the plan was scrapped at the last minute on Sunday.

Pro-BNP organisation Doctors Association of Bangladesh (DAB) convener Haleem spoke to the media at BSMMU on Sunday afternoon after it was reported that the BNP chief had refused to go to the hospital.

“I am informed that Begum Khaleda Zia’s health is in very poor condition. She cannot even put her feet on the rests on wheelchairs properly. She [Khaleda Zia] expressed her wish and the specialist team led by Prof FM Siddiqui clearly agreed that she should be admitted to United Hospital.”

“She receives treatment at that hospital and that is where the specialist doctors who have attended her thoughout her life are.”

“BNP leader Begum Khaleda Zia was to come here today, but she will not come. We are always ready to give her medical treatment.”

Asked for the reason for the BNP chief’s refusal, he said:

“The prison authority informed me she would not come. We were prepared to receive her and the medical board and cabin were ready. We would have given her proper care according to her needs.”

The medical board had gone to the prison on Feb 28 to conduct some tests on Khaleda Zia, the BSMMU director said. They had recommended she be taken to BSMMU ‘soon’ for further tests.

But Khaleda Zia does not have faith in BSMMU, claimed DAB leader Haleem.

“She came to this hospital [BSMMU] twice and did not receive proper care. Because of this she asks us to take her to United Hospital. The team that went to see her at the hospital said the same thing once they saw her – to take her to Untied Hospital where her specialists can see to her care.”

The ‘recommendations of doctors’ had not been followed when taking Khaleda Zia from the hospital to prison in October, he claimed.

In response to a question, he said:

“Everyone has a doctor or a team of doctors who treat them and who they trust. Our leader Khaleda Zia trusts the specialists at United Hospital.”

“Ergo she will feel better mentally and physically if she receives treatment there.”

“We have seen that she has been brought here twice. The rheumatoid arthritis joints have already been deformed. Because of these deformities she cannot move without a wheelchair.” 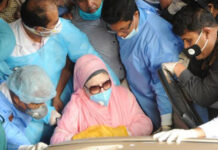 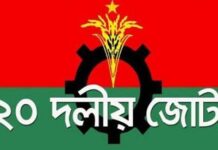 There is room for talks: FM