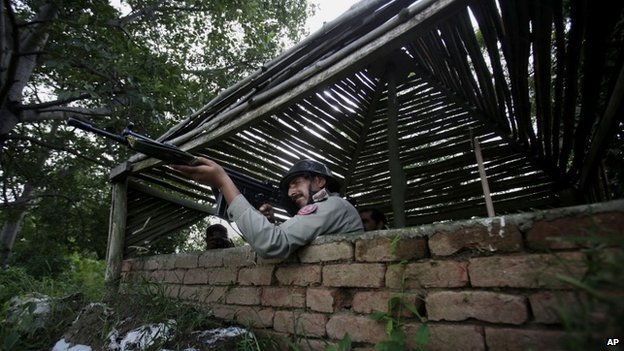 At least 19 people have been killed in the past week’s attacks, officials say

India and Pakistan have traded warnings over a surge in violence in Kashmir which has killed at least 19 people.

Pakistani Defence Minister Khawaja Asif said his country would “respond befittingly to Indian aggression” but it did not want confrontation.

His Indian counterpart, Arun Jaitley, had earlier said Pakistan would be made to pay an “unaffordable” price if it persisted with “adventurism”.

Each side accuses the other of starting hostilities which broke out a week ago.

At least 19 civilians have been killed as troops continue to exchange fire in some of the worst violence in the disputed region in a decade.

Of those killed since fighting began last Friday, 11 are on the Pakistani side while eight are on the Indian side.

“We do not want the situation on the borders of two nuclear neighbours to escalate into confrontation,” the Pakistani Defence Ministry said in a statement. “India must demonstrate caution and behave with responsibility.”

A ceasefire agreed in 2003 remains in place, but the nuclear-armed neighbours often accuse each other of violating it.

“If Pakistan persists with this adventurism, our forces will make the cost of this adventurism unaffordable for it,” Mr Jaitley told reporters in Delhi. “Pakistan should stop this unprovoked firing and shelling if it wants peace on the border.”

Asked about the reasons for the surge in violence, Mr Jaitley said it “is an effort [by Pakistan] to precipitate tension for both domestic and international reasons”, without giving more details. He said Pakistani fire was to provide cover for Pakistan-based militants to cross into Indian-held territory.

The head of the Pakistani forces patrolling the frontier, Maj-Gen Khan Javed Khan, told the BBC that the Indian attacks were the most intense in decades.

“I just want to know the reason from the other side. We are not finding the answer,” he said. “But if they continue to fire, they will continue to see a major response from us.”

The latest round of hostilities comes just months after India’s Prime Minister Narendra Modi invited his Pakistani counterpart Nawaz Sharif to his inauguration.

But relations have deteriorated since then.

In August, India cancelled talks with Pakistan after accusing it of interfering in its internal affairs.

And last month, Mr Modi, in his first speech at the UN, said he wanted peace talks with Pakistan but insisted it must create an “appropriate atmosphere”.