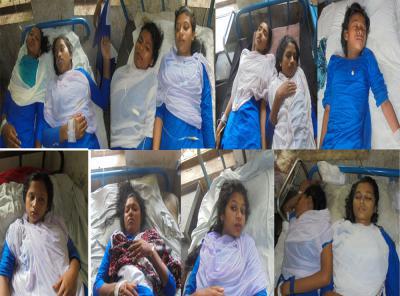 Local activists of the ruling party’s youth front, Jubo League, have physically attacked at least 40 schoolchildren for bringing out a procession protesting the assault of one of their teachers in Chandpur’s Kachua upazila.
Among the injured, a total of 20 schoolchildren (13 girls and 7 boys) have been admitted to upazila health complex.
The students brought out the procession on Sunday morning as one of their teachers was assaulted by a group of Jubo League activists over an extortion incident.
The Jubo League activists demanded Tk 15,000 from Bhuiara High School authority of Kachua to observe  National Mourning Day on 15 August. The activists assaulted the teacher when he refused to meet their demands.
Bhuiara High School headmaster Dulal Chandra said, “A group of Jubo League activists led by Faruq, Liton, and Monir demanded Tk 15,000 on Friday night to organise National Mourning Day programmes. They beat an assistant teacher of the school, Fazlur Rahman when he refused to meet their demands.”

Protesting the assault, students were demonstrating at the school playground. At this, the same activists who beat Fazlur Rahman attacked the students with sharp weapons and sticks, the headmaster added.

Kachua upazila health complex physician Bijoy Dutta said the students who were hurt seriously in the attack have been kept in the hospital, while the rest have been released after being given first aid.

“Legal steps will be taken after investigation,” the OC said.

Kachua Jubo League president Nazmul Alam Swapan said, “The people who were behind the attack are not activists of Jubo League. They are terrorists. We have urged the police to take action against them.”