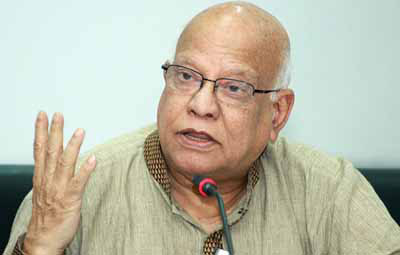 The minister for finance, AMA Muhith, on Thursday listed job creation and private sector mobilisation as two major challenges towards implementing the Seventh Five Year Plan, reports United News of Bangladesh.
‘The number one challenge (for 7th FYP) is job creation and then the 2nd challenge is private sector mobilisation,’ he said while addressing the development partner-local consultative group plenary on the 7th Five Year Plan at the city’s NEC conference room.
The minister said the government’s projection for additional job creation during the 7th FYP is 18.7 million whereas the new addition to workforce would be $ 12.5 billion adding that this target is very ambitious.
Citing the target of raising private investment to 26.6 percent of GDP by FY20 from the present level of 22.07 percent, Muhith said, ‘The private sector has a dormant capacity and it needs to be activated and we’ve to think about it.’
He also opined that foreign contributions to the development financing needs to be highly accelerated for the private sector.
Regarding the low level of FDI in the country, minister said the FDI was $ 1.57 billion in calendar year 14 whereas the target of attracting FDI has been set at $ 9.6 billion in FY 20. ‘So, this is one area of great importance where the development partners could make some contributions.’
He also said a study is there that reveals that the cost of corruption to GDP is also 2 to 3 percent which is a very serious problem. ‘Punitive measures and detection measures are not adequate enough to deal with this problem …and this government has taken help from CT in this regard.’
Acknowledging that the country’s financial sector had a lot of disaster scenes over the last few years, he said the reforms in the financial sector is in such position right now that it is possible to jump off in a big way.
About inequity, the minister said the country has done well to address inequity at the lower level while within the rich group, inequity is still very high.
Talking about the government’s policy to address the issue of urbanization, he said that government efforts would be there to take urban population outside Dhaka with the help of the PPP initiatives.
Muhith said the government is planning to create an area or centre, nearly 30 kilometres out of Dhaka somewhere, near Mawa, based on the proposed expressway from Airport to zero point and zero point to there.
He said this will be implemented by 2017 and is expected to drive out some population from Dhaka.
About the political problems in the country, the finance minister said he had been telling for some time that the government was trying to create the economic forces in such a way that this kind of resistance or indiscipline to the peace of the country just disappears and it was happened in 2015.
He also highlighted some areas which would need special attention during the implementation of the 7th Five Year Plan that includes education, health, agriculture and skill development.

Bangladesh favours Japan for port and power plant over China