Jaya Ahsan’s acting skills had spilled over to the West Bengal with “Abarto”, and now with the release of Srijit Mukherji’s much-awaited multi-starrer “Rajkahini”, Jaya has been spending busy days on the other side of the fence. On her return to Dhaka, she spoke to The Daily Star about her recent days, and upcoming: 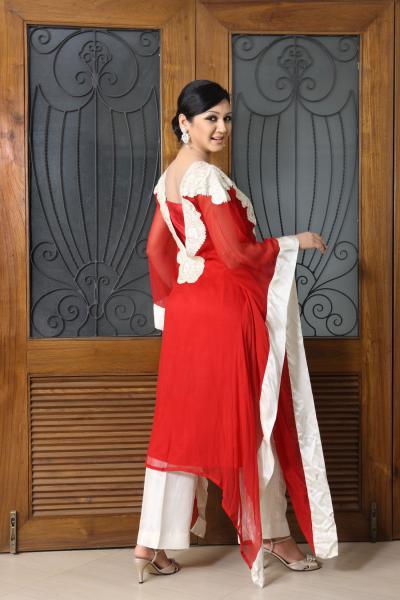 How have your days been with the release of the new film?
Jaya: It’s been excellent! Especially the film releasing on Durga Puja added to the festivity. I have had a great time.

What has been the response to “Rajkahini” so far?
Jaya: Rajkahini is holding the pole position in the charts, and everyone has praised it heartily. It’s very satisfying to get such feedback.

You have had to spend some time there promoting the film as well …
Jaya: Promotion is a part of the film’s scheduled commitments here. We’ve given interviews to TV and newspapers, visited the Presidency College and various restaurants and theatres as hosts.

Where did you first watch the film?
Jaya: The film premiered at Kolkata’s Imax City, and that is where I first watched it.

How busy were your schedule there?
Jaya: Not too much, really. Mother was on vacation, so I spent a lot of time with her. We visited a lot of places and shopped a lot (laughs).

Will “Rajkahini” release in Bangladesh?
Jaya: I don’t really know about that. Maybe there could be special screenings here.

Tell us a little about your character, Rubina.
Jaya: I play the character one of the eleven prostitutes, who are at the centre of the film. But I think the film was less about us as individuals and more about us as a collective. I have tried my best to portray Rubina on screen.

How busy is your schedule in Dhaka at this moment?
Jaya: I have two films in the pipeline. I’ll start filming for “Putro” soon, and after that I have dates for “Khacha”, under Akram Khan’s direction. It is an adaptation of a Hasan Azizul Haq story

Lux Channel i Superstar 2012: Beauty and glamour come together