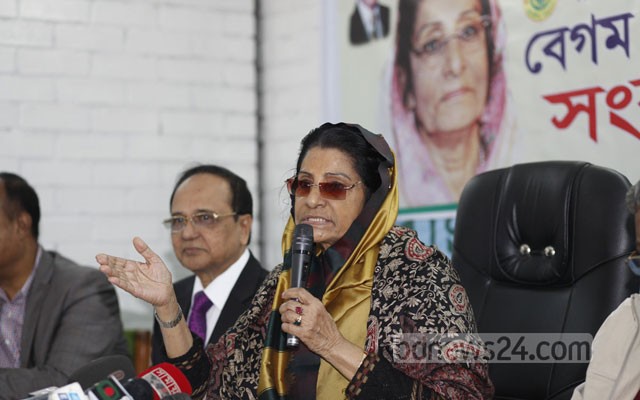 Jatiya Party Presidium member Raushon Ershad has indicated that her party will remain in the government.

Her stand assumes significance as the JP chief and her husband HM Ershad had earlier suggested that party leaders should give up Cabinet berths.

She answered in negative when reporters asked her on Tuesday if the Jatiya Party was leaving the Cabinet.

Raushon, also the chairman of Jatiya Party’s parliamentary party and leader of the opposition in Parliament, faced reporters after a 10-minute meeting with Prime Minister Sheikh Hasina.

Three Jatiya Party lawmakers have secured Cabinet berth after the 10th national elections held on Jan 5, 2014 that the BNP had boycotted.

Despite taking part in the government, the party has also assumed the role of the opposition in Parliament.

When asked whether she had discussed Jatiya Party’s present ‘crisis’ with the prime minister, she said, “Why should I discuss it with her? It’s our internal matter.”

The Jatiya Party is facing a crisis after Ershad named his brother GM Quader as the party co-chairman and his successor and changed the secretary general.

Raushon and her supporters rejected the decision.

On whether she accepted Quader as the party co-chairman, Raushon said, “New leadership can come. It’s a normal affair in a party.”

Ershad had earlier suggested that his party members should give up Cabinet posts and play the role of a real opposition party in Parliament.

He said people were confused about the stance of the party due to its dual role.