by Tuhin Shubhra Adhikary and Mintu Deshwara, back from Sylhet 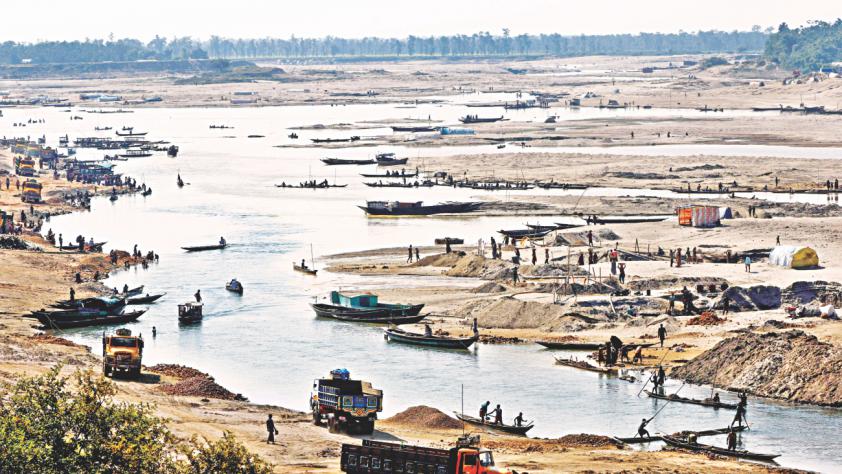 “Man, do not pride yourself on your superiority to the animals, for they are without sin, while you, with all your greatness, you defile the earth wherever you appear and leave an ignoble trail behind you.”

Jaflong Zero Point in Sylhet is a horrid example of how cruel man can be to nature and environment.

Once a popular tourist destination with a river and hills and hillocks, it is now a mess of machines and man’s greed.

Power pumps rumbling on the sandbars in the Pyain river, hundreds of people busy around wells dug with excavators, trucks waiting on the banks, boats anchored at a distance — all for one thing: extracting stones from the riverbed and transporting those.

The place that once used to remain abuzz with nature-lovers now only sees assemblage of labourers.

The illegal mechanised stone extraction is virtually destroying the beauty of the tourist attraction and this is happening under the very nose of the administration.

A section of unscrupulous businessmen, allegedly in collusion with the local administration and the ruling party men, is collecting stone from the Pyain using machines, including excavators, in complete violation of a High Court verdict. The court also directed the government to immediately remove all the machines from there to protect eco-system, biodiversity and livelihoods of people living along the rivers.

During a recent visit to the area, these correspondents found labourers using a number of excavators to dig big holes on the sandbars popped up in the Pyain and several dozen machines to pump water out.

A large number of stone crushers were set up on the riverside hillocks. The round stones collected from the riverbed were being crushed into chips to be transported to different parts of the country for use in construction work. “There is a syndicate, dominated by the ruling party leaders here. They collect money from the businessmen and pay the local administration officials from that.

Each businessmen has to pay between Tk 20,000 and Tk 25,000 per day for using a dredger machines locally known as Boma Machine, he said. “No one can run businesses without paying the bribes.”

Altaf Hossain, a boatman, said the stone extraction started in mid-September this season and would continue till the monsoon begins. Though this is the peak of tourist season, only a handful of visitors could be seen there.

Jahidul Islam, who runs a tiny restaurant on the riverbank, said his business declined sharply in the past two-three years as the tourists’ flow dropped.

“Most of the people who come here now are labourers. We see only a handful of tourists in a day.”

Shah Shaheda Akhter, coordinator of Sylhet division chapter of the Bela, is shocked to see how the administration is ignoring the HC order.

“If someone without prior knowledge of Jaflong goes there, they might mistake the place for some industrial area.” “We repeatedly asked the authorities concerned to do something but some sort of reluctance is evident in their attitude,” Shaheda added.

The indiscriminate stone extraction is hurting the adjacent tea gardens as well.

Authorities of Jaflong Tea Garden filed a general diary on September 12 with Gowainghat Police Station, saying around 300 acres of the tea estate had already been devoured by the river due to stone extraction.

They mentioned names of 32 people as the ones responsible for this. The Daily Star has a copy of the GD. This sign beside the Pyain river in Jaflong Zero Point in Sylhet warns visitors of turbulent water. Photo: Anisur Rahman

The garden authorities also requested the local administration to take necessary steps to save the century-old tea estate from destruction.

“The Dawki river is almost dead due to the unplanned stone extraction from its bed.”

The stone crushers cause sound and environmental pollution and health hazards, Karim said.

In the face of pressures from the media and environmentalists, the administration sometimes conducts drives, “which in many cases are merely an eyewash,” Kim alleged.

“If anyone wants to go to Jaflong, I simply tell them, ‘You can go there not to see the nature but to witness how the beautiful nature is being destroyed,'” he said. However, in many places the river has lost its strong current due to illegal mechanised stone extraction. The photos were taken recently. Photo: Anisur Rahman

Director Saleh Uddin of the Department of Environment in Sylhet, however, refuted all the allegations.

He claimed he hadn’t seen any excavators or stone-carrying boats during a recent visit there.

“They [environmentalists] always blame the administration when they speak to the media. But they do not play any role in protecting the environment,” he alleged.

Asked about the complaints of Jaflong Tear Garden authorities, Officer-in-Charge Abdul Hye of Gowainghat Police Station, said they had conducted raids in the area on several occasions.

“But somehow they had got information about the raid beforehand and removed the equipment before we could reach there.”