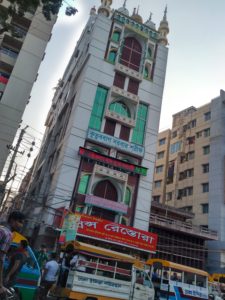 The time is approaching. One can tell by the busy construction work building gateways, arches and domes in and around the Anowara park in Farmgate. For over a month, the park is not available to the public. No playing, walking or resting. It will belong to Kutub Bagh Darbar Sharif. Every year, the Urs or the so called ‘religious gathering’ at the Kutub Bagh Darbar Sharif is held much to the discomfort of the people who live in the nearby places. It is normally held in the second week of February. Construction by bamboo and colorful fabric began in December.

Superman or scam, the urs that Jakir Shah holds every year in Anowara Park in front of the National Parliament, the country’s highest seat of power, is confrontational with the law on conservation of playgrounds, parks, open spaces and wetlands. The law prohibits rent and lease of these places for anything other than their designated use.

There is a High Court order that directs the government to ensure proper maintenance and protection of playground and parks. However, the Government, Ministry, the Mayor and the ward commissioners have allowed Kutub Bag Darbar Sharif to use the park free of cost. 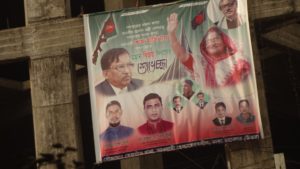 Authorities in Poribesh Bachao Andolan, an organization that fights for the protection of the environment, admit that in our country, especially in Dhaka, our breathing space is limited as it is, and because of these kind of allowances, parks and playing fields remain unusable to the city dwellers for most of the time.

“There are corrupt officials in the Ministry who give such permissions. They take bribes and tell the media that they will never do it again,” an unnamed official said, “And within a few days they give another organization the go ahead to use parks and fields. Anisul Huq, the mayor who has been seen in TV during dismantling of illegally occupied land by Monem Khan’s son in Banani, his welcome signs on the fences of Anowara park seems like welcoming Kutub Bagh’s urs. 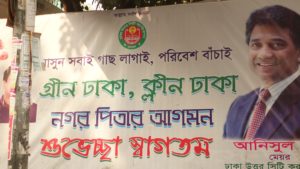 Welcome sign for Anisul Huq, the mayor of Dhaka North right on the fence of Anowara Park

Fondly called ‘Baba’ by his disciples, Jakir Shah, the self-styled pir or spiritual guru who runs Kutub Bagh Darbar Sharif is frequented by luminaries like past military dictator Hussain Mohammed Ershad, Awami League (ex) Minister Shahara Khatoon, and many AL ministers and MPs. The disciples of this fake Pir are the vote bank that these politicians are seeking. There is nothing holy about this Pir. He runs a scam. 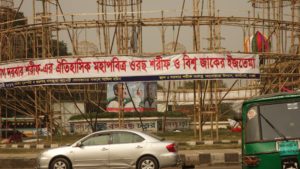 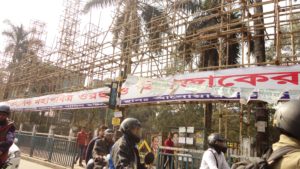 Entire Anowara Park will be decorated and for the URS 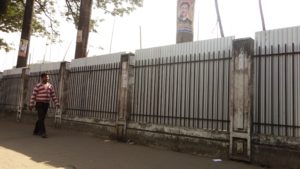 Closing off the park has begun 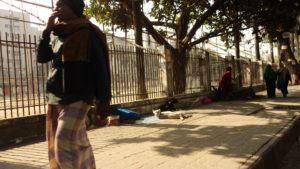 The educated and conscious people of Farmgate and Manik Mia Avenue feel that the government should take action against such self declared pirs who are misguiding general people in the name of Islam. Furthermore, they also believe that such a ‘showdown’ in the name of Urs is unprecedented and should not be allowed considering the sufferings of the nearby people who get affected due to it. 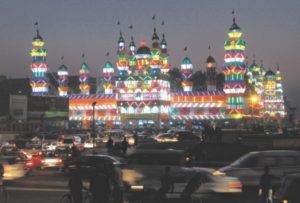 Finished arches will be lighted like this one from the past

Ershad should have been hanged

Khaleda to meet allies on Savar