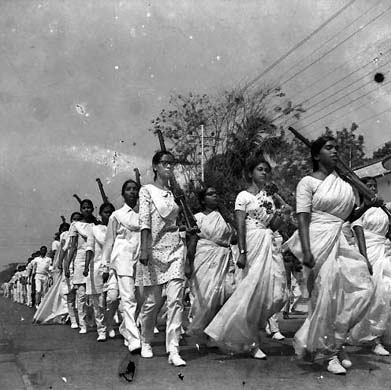 Bangladesh has taken a significant stride by attempting to describe a more inclusive history of 1971. They did so by declaring the rape victims of 1971 as “freedom fighters”.

This achieved two objectives. First, it recognised the victimisation of women as part of the war effort. Second, it was an attempt, albeit a very delayed one, to reduce the stigma of sexual abuse and violence suffered at Pakistani hands by Bangladeshi women. It took a long time in coming but we are grateful that it has happened.

However, this is a very partial and narrow recognition of the role of women in the birth of Bangladesh. If it took 44 years to recognise an obvious fact, how long it will take us to learn to look at women as participants in every space of society that led to the birth of Bangladesh, is a legitimate question.

Exclusive history writing is a phenomenon that is common in many post-nation states /society. Such states and societies form several circles of identification and priorities that define what constitutes a significant role in state-making and who are a part of that.

Such identifications are usually limited to those who occupy positions of power after the war is won. These designations become very specific and direct unlike the struggling years when they were rather vague and certainly more open.

This is because widening the participation door allows many more to join the struggle which helps the victor.

The slogan is to say, “It’s a war for all”, because all are needed to win the war. So in order to keep the flow of support going, the elite pretend that it’s everyone’s war, but when it comes to dividing the benefits, it’s only the elite who gain.

History writing is a mirror of that mentality and reality which is why, historical research also acts as the great excluder of other contributors in the national mind.

In this process of narrowing the identity of the victor, women find no space and become invisible in history.

While honouring rape victims as Muktijoddhas is very laudable, it also shows where women are dominantly consigned to the 1971 narrative. While we praise the decision, we should ask what a liberation war really is, and what the contributions are that we accept as essential to the victory in the annals of state-making.

Basically, we think of “Muktijuddho” as “Juddho” (war) rather than “Mukti” (liberation), so the liberation part of the war is absent when we discuss 1971.

It is obvious that only two groups of people are allowed to be a critical part of the war – the warriors and the politicians. Others matter little. So the heroic imagination prevails and the scribes of war focus only on the guns and speeches leaving an entire people outside the frame.

The liberation war, unless it’s a military or a political activity, barely exists. The civil space is annexed by the powerful creating an occupation based “caste” of sorts in nationalist politics.

In this space, neither the ordinary people, nor even the ordinary soldier exists. It creates a small group of privileged and powerful people who justify their actions in the name of their participation including the scale of their sacrifices. Political power is equated with participation and that is why it has become such an important tool of privilege-gathering. So only the powerful are mostly seen as participants.

Yet the numbers cited for those killed in 1971 – 3 million dead – include mostly ordinary people who are not even mentioned in any document. We barely know any names or the circumstances of such deaths and it doesn’t bother us.

We barely want to know what women experienced in that year and their million sacrifices to keep the household going, the family fed and protected, and the incredible suffering of those who were repressed by enemies; who gave up their children who went to fight for the war leaving the mothers behind left with the duty of looking after the family.

If the number of 3 million dead is accurate, we are then talking of millions of women who bore the burden not just during the war days but afterwards as well. While we mourn the mass killing of Shohagpur, we rarely remember what the widows had to go through to keep the children alive till they grew up.

It would seem that in our history women can exist only if they bore arms, helped male warriors, or were raped. History can accommodate them only as subordinates or victims. We wonder if we are doing enough to change that mindset.

The spirit of 1971 can’t be captured by focusing only on men and their actions. In 1971, women kept society going and played every role possible including as warriors when they had the chance or opportunity.

There is no question of reducing the role of men in this war but unless we develop a new paradigm of describing what went on in that war, for both men and women, we will only view women’s participation as victims and helpless dependents.

This was not a fact but till we learn to understand and relate the significance of women’s roles in 1971, we shall be left with the history of the war alone and without the part of liberation.

Incidents of murder, dacoity, kidnapping on the rise

Your money is no good here