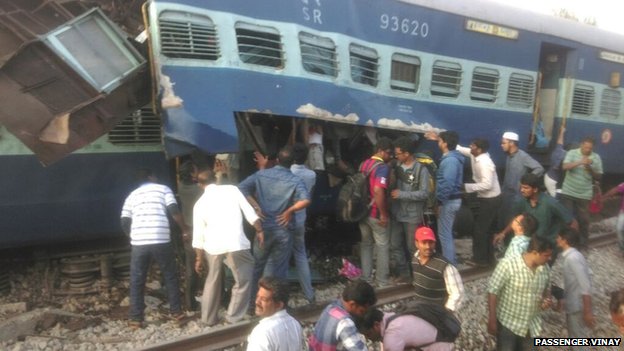 At least 11 people have died after three coaches of a train derailed in the southern Indian state of Karnataka, railway officials say.

The accident took place near Anekal, about 40km (25 miles) from the state capital, Bangalore, on Friday morning.

Officials said the toll was likely to rise as many bodies were trapped in the wreckage. Seventeen people are injured.

There have been numerous train accidents in India in recent years, killing hundreds of people.

“I had dozed off when there was a sudden jerk and people started falling off,” Vinay, who works for an IT software company, told BBC Hindi’s Imran Qureshi.

“I tried getting out through the emergency exit window, but there was a lot of smoke. So we jumped out of the train.”

In October, 12 people were killed after two passenger trains collided in the northern state of Uttar Pradesh.

In May, 23 people died after a passenger train derailed and hit a stationary goods train also in Uttar Pradesh.

No Nawaz meet for Modi

19 dead in stampede at a Hindu ceremony in India