Maoist rebels have killed at least 14 paramilitary policemen in an ambush in central India, officials say.

The officers were reportedly surrounded and attacked while raiding a rebel hideout in a forested area.

The Maoists say they are fighting for communist rule and greater rights for tribal people and the rural poor.

Their insurgency began in the eastern state of West Bengal in the late 1960s, spreading to more than one-third of India’s 600-plus administrative districts. 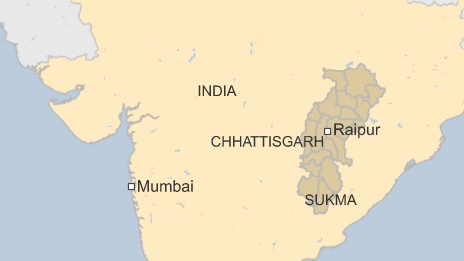 A Central Reserve Police Force (CRPF) spokesman in the area of the attack told the AFP news agency that the rebels had used human shields.

“[They] were using local villagers as shields, hence our force couldn’t retaliate with full force as that would also have cost villagers’ lives,” Zulfikar Hasan said.

At least 11 CRPF men were also injured in the attack, police say.

Chhattisgarh is often hit by Maoist violence. At least 15 policemen were killed in a similar attack in the state in March.

In May 2013, rebels targeted a convoy carrying state Congress leaders and party workers in Sukma, killing 27 people, including some top state politicians.

Major military and police offensives in recent years have pushed the rebels back to their forest strongholds and levels of violence have fallen.

But hit-and-run attacks are still common, killing hundreds of people every year.