In Search of a Lost Ahom Princess

While some historians say Pori Bibi’s tomb in Dhaka is that of Ahom princess Ramani Gabharu, others say it is of Mughal general Shaista Khan’s daughter. 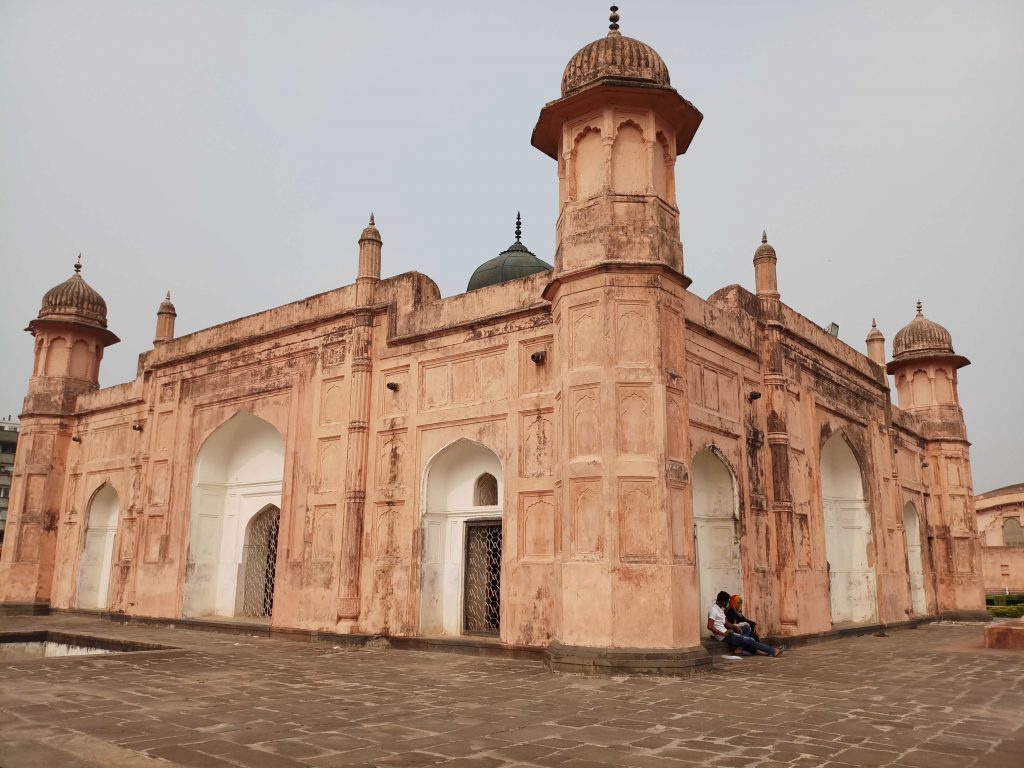 Dhaka: Unlike many national capitals, rickshaws are one of the most popular means of transportation in Dhaka, jostling for space with the latest models of swanky automobiles on city roads. They are ideal if you are entering the many thin alleys of the old city.

Lalbagh Fort, the 17th-century unfinished Mughal edifice constructed by Shaista Khan, the governor of Bengal during Aurangzeb’s rule, stood in one such alley. Step inside the sprawling surrounds of the half-made fort with a spread out, manicured garden, and it is a relief from the relentless traffic of the congested city and the accompanying cacophony.

The reason the fort attracts a large number of domestic and foreign tourists every year is a mausoleum within its ramparts, popularly referred to as Pori Bibir Kobor. Any rickshaw puller in Dhaka will drop you at the fort gate if you take that name.

Peeking through a locked iron door that stands between a visitor and the concrete tomb with floral carvings, one question was on my mind – Was this indeed her?

There has been no definite answer to this question ever since the tomb was identified as that of Pori Bibi’s. Though many historians have over the generations tried to delve into the true identity of Pori Bibi, it is still a matter of debate.

Having come from Assam, the question, though, is important to me. To our history. To a forgotten character from Ahom history.

While many in Bangladesh refer to Pori Bibi as the beloved eldest daughter of Shaista Khan, who was married to Aurangzeb’s son Muhammad Azam Shah. On her death in 1684, a broken Khan apparently abandoned the idea of further construction of the fort and buried her within its ramparts. There are some important historians who have written about her as the Ahom princess that Mughal general Mir Jumla brought with him from Guwahati as part of war booty. 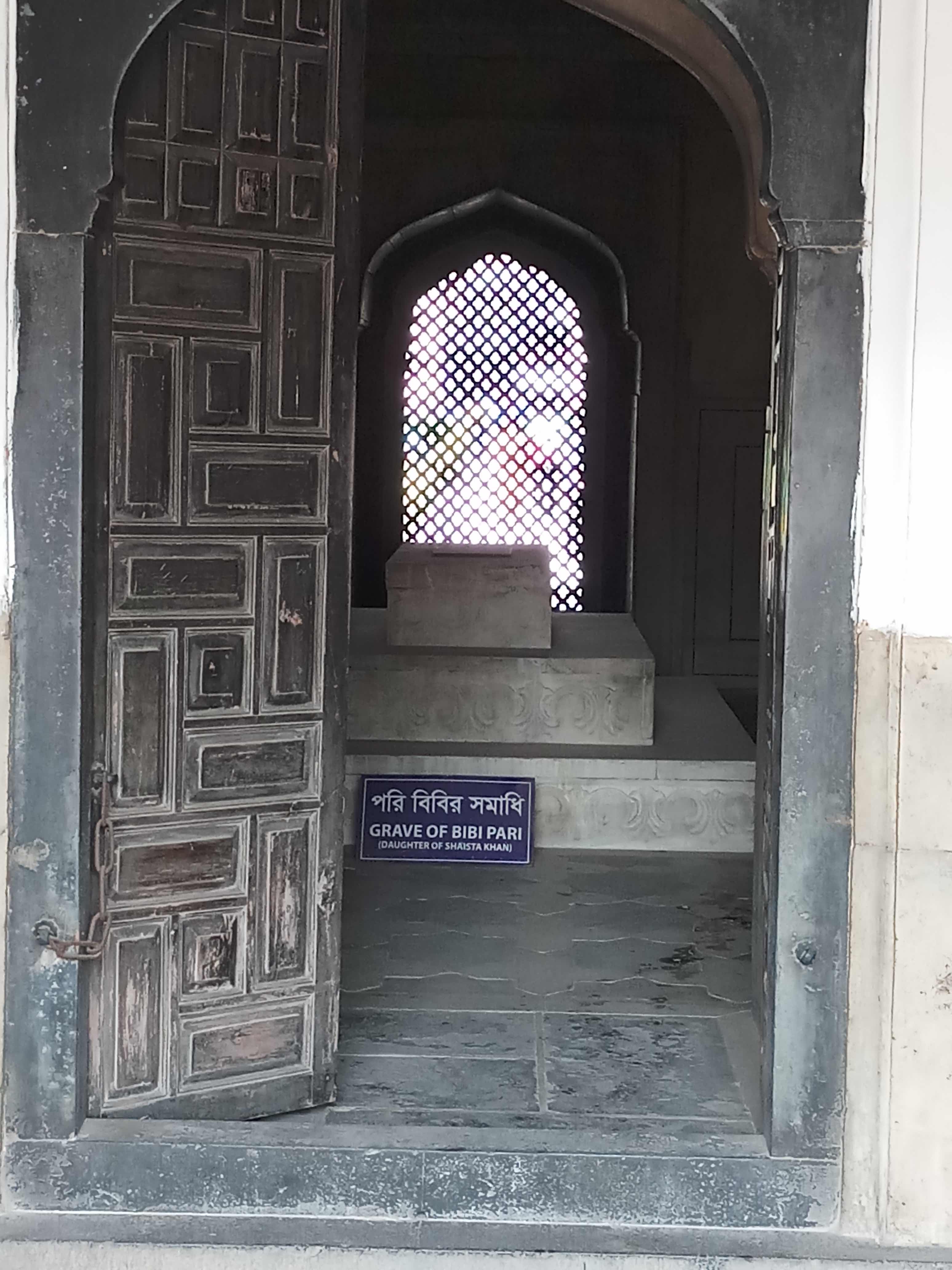 Known in Assam history as Ramani Gabharu, the only daughter of the Ahom king Jayadhaj Singha (1648-1663) and the niece of the greatest Assamese warrior Lachit Borphukan, the princess – when she was all of six (some say she was 11) – was given away as ransom to Mir Jumla’s army. Ramani was accompanied by the minor princess of the Tipam king, also a part of the ransom to the Mughals. The peace treaty between the Ahoms and the Mughals was signed in Ghilajharighat under the rule of a Tipam king, an ally of the Ahoms, in 1663.

While Mir Jumla fell sick and died on his way to Dhaka (his tomb lies in the Garo Hills in Meghalaya bordering Bangladesh), the princess was believed to have been put under the care of Shaista Khan on reaching Dhaka, then capital of Mughal Bengal.

It is commonly denoted that under Aurangzeb’s orders, Ramani was converted to Islam, given a new name, Rahmat Banu, and in 1667, was given in marriage to Aurangzeb’s son – as his first wife – with a dowry of 1,80,000 rupees.

According to the seminal treatise on the evolution of Dhaka as a city, Glimpses of Old Dhaka, written in 1952 by the well-known chronicler from Bangladesh, Syed Muhammad Taifoor, Pori Bibi was none other than Ramani Gabharu.

“Emperor Aurangzeb converted her to Islam and in 1677 gave her in marriage to Prince Azam on a dowry of rupees one lakh and eighty thousand. The princess lived in Dhaka suffering from some puerperal disease.” He wrote that since she was extraordinarily beautiful and a great favourite of the prince, she was affectionately called Bibi Pari (or a fairy).

A similar theory could be found in a paper written in Bengali, ‘Ahom Rajkonna Bibi Parir Samadhi’ by chronicler Begum Lutfunnesa Habibullah. Her paper was based on Ahom chroniclers.

Some also say that the achiyatnama of Shaista Khan, said to be preserved in the Katra Waqf office of the government of Bangladesh, identifies Rahmat Banu as Iran Dukht or Bibi Pari.

Archaeologist Ahmad Hasan Dani, however, came up with a contradictory theory. He said as per a document signed before Khan’s death, two of his five daughters were present in Dhaka – Iran Dukht and Turan Dukht. He identified Iran Dukht, Khan’s eldest daughter, as Bibi Pari and went on to say that she too was married to the prince.

However, Taifoor countered this in his book, stating, “There is no evidence to prove that this young prince (Azam) was engaged or married to Shaista Khan’s daughter, born of some obscure concubine. Besides, we find that at this time, the Prince had already four wives whom he married in quick succession. As such there was no possibility of contracting a fifth marriage, grossly transgressing Muslim law.”

Taifoor also went on to give Prince Azam’s marriage to the Ahom princess as the reason why Pori Bibi’s Kobor has a unique pre-Muslim architecture, with the original main door fitted with sandalwood bearing Chinese cross motifs. Considered a unique piece of Mughal constructions in present-day Bangladesh, the tomb, made on a raised stone platform, has black basalt on its roof and a copper dome and lotus finial, besides marble and glazed tiles in the nine chambers. (Taifoor, who was closely associated with Dhaka Museum since its inception, was also a major proponent of the present spelling of Dhaka from the British Dacca, which was accepted by the government in 1982, ten years after his death.)

One of the chambers of Pori Bibi’s tomb also houses another grave, identified as that of Shamshad Banu, said to be another daughter of Shaista Khan. Though till now, it has not been explored what happened to the little princess of the Tipam king who accompanied Ramani Gabharu to Dhaka. 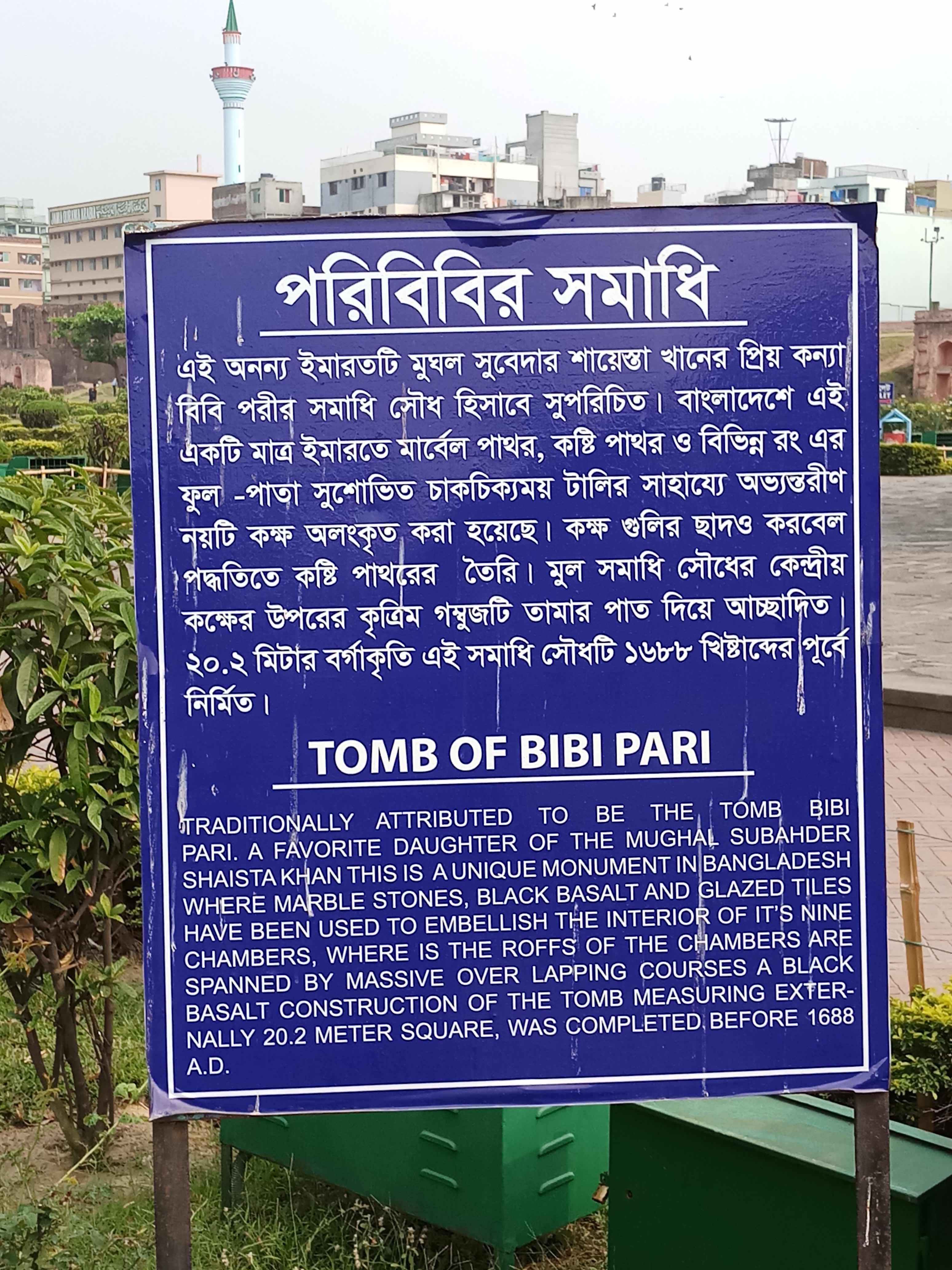 From Pori Bibi’s tomb in Dhaka. The Department of Archaeology took over the monument in 1974. Credit: Sangeeta Barooah Pisharoty

Reacting to why so little is known about Ramani Gabharu, and lesser about her possible tomb in Dhaka in Assam, even though she was an Ahom princess, Jahnabi Gogoi Nath, professor of history at the Dibrugarh University, said, “Though Ahoms were particularly known for writing history or buranji, those chronicles mostly spoke of men and their battles. The patriarchal outlook towards women was very clear and that is the reason we find so little even about queen Joymoti in Ahom buranji though she is otherwise such a popular character in the socio-cultural space of Assam.”

She said, “Though we find in the chronicles the evidence of Ramani Gabharu being given to the Mughals as a part of the peace treaty, that Tipam princess was sent along as a xokhi (a friend; so many elephants, maids, etc. were part of her retinue, but little mention is found in those notings about what happened to her. So you can say she is more or less a forgotten character of Ahom history simply because she was a woman.”

Girin Phukan director of the Institute of Tai Studies and Research in Assam’s Moranhat, which is a repository of Ahom history, agreed. “That she was ignored by history even though she sacrificed herself for her motherland was because of patriarchal outlook, not just of those who wrote those buranjis but also in later studies.”

The first, and probably the single most important, work on Ramani Gabharu in the 20th century was by late Surya Kanta Bhuyan, an important historian of his time in Assam. In a monograph published in 1951, Ramani Gabharu, he spoke of a letter written by Ramani Gabharu to Laluksola Borphukan, her maternal uncle and brother of Lachit Borpukhon, not to surrender Guwahati to the Mughals and commit treason. The letter was apparently written after she got to know of a plan to hand over Guwahati to the Mughals in lieu of which Laluksola would be made the king.

Though Phukon’s institute takes up work on preservation of Ahom-era documents, he didn’t know the whereabouts of that letter. Neither did Professor Gogoi Nath.

“Recently, the Assam Publication department released an Ahom history written by Nauboisa Phukan in the 20th century, a descendant of the Ahom dynasty, where he mentioned Ramani Gabharu. But the language he used to describe her and her life was considered by many as not that of a historian. It was more emotional than being based on evidence,” said Gogoi Nath.

That the history of Assam or Northeast is not part of mainstream India curriculum of education, Phukan said, also hampered more research, particularly in terms of funding.

He also added, “For quite a few years, unfortunately, history is not a part of curriculum even in Assam schools. So when there is no demand for history books, there is obviously less stress or patronage on research to write books. Earlier, as a part of strong oral traditions of storytelling in Assam, these historical characters were alive among people. But in today’s times, if we don’t write well-researched history books, our history would one day be forgotten, particularly when our present generation is not studying our own history.”

It is one of the reasons, well-known theatre director Avinash Sarma said he thought of staging a play in Assamese on Ramani Gabharu in 2016.

“Ramani Gabharu was not only a tragic historical character but also so heroic at such a young age. Though she could never return to her motherland her love for Assam was proved in the letter found in the writings of S.K. Bhuyan. That is why she attracted me. The other reason being that when the education system doesn’t give these characters much space for remembrance, then theatre as a tool can keep alive our oral traditions of relating the stories of these characters to younger generations,” Sarma said.

“The play was written by Dr. Dinesh Sarma around end-2015, particularly to revive her character. Most theatre directors don’t take up period plays mainly because of the cost involved in it, be it the costumes, the settings, the number of characters, etc. I could do it because of funding from the Ministry of Culture. We first presented it at Rabindra Bhavan in mid-2016 and thereafter in Orissa in 2017,” he added.

Back at Pori Bibi’s tomb in Dhaka, standing by me, a young mother asked her little son to peek through the iron door and look carefully at the kobor. “Didn’t I tell you about the story of Pori Bibi who as a jin (an apparition) roams the Lalbagh Fort at night? See, she lies there.”

Much as historians may try to pin down who she really was, or many in Assam hope it is indeed Ramani Gabharu, the legend of Pori Bibi is kept alive in Bangladesh through ghost stories.