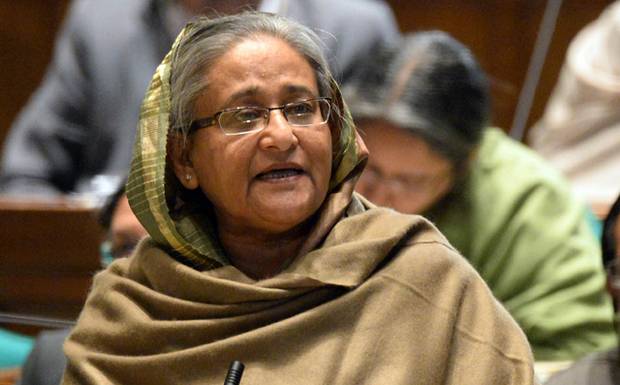 The prime minister, Sheikh Hasina, on Sunday said that BNP chairperson Khaleda Zia’s ‘expectation for usurping state power with the help from different powerful quarters removing the incumbent government had faded away.
She made the remarks at a discussion organised by her party Awami League at the Krishibid Institute auditorium to mark the International Mother Language Day.
She said that Khaleda had thought that she would get help from the ‘Uttar Para’ but no response she received from there.
Hasina said that none would dare to usurp the state power as the 15th amendment to the constitution made a provision of capital punishment for any illegal usurpation.
Getting no response from the people to her movement, Khaleda had expected help from foreign countries including the United States but Washington had already turned around after ‘fraudulence over the statement issued by BNP in the name of six congressmen,’ said the prime minister.
She said that US secretary of state John Kerry had already offered his renewed support to Bangladesh government calling for an end to the ongoing violence.
Hasina said that the BNP chairperson had expected that Indian new prime minister Narendra Modi would support her but that was also dashed to the ground in the wake of a false claim of a telephone talk between Khaleda and the Indian ruling BJP president.
Hasina said that the BNP chairperson had been playing with the lives of the people in the name of movement since the beginning of January with different ambitions.
‘But her ambitions would not be fulfilled, rather she would not be able to escape the public wrath for what she is doing now in the name of movement,’ Hasina said.
Referring to the atrocities including burning people to death during blockade coupled with general strikes on the working days, the prime minister questioned Khaleda what democracy she wanted to establish by killing people.
Terming the bombers ‘Khaleda Bahini’ and comparing them with Pakistani occupation force, Hasina said Khaleda had a link with international militant network Islamic State.
She said that Khaleda confined herself to her office and she was leading a lavish life there by calling for a blockade across the country.
As for the claim that the government had barred food supply to Khaleda’s office, the prime minister said that the government could not allow food from different sources to Khaleda.
‘If anything happens to her [Khaleda] due to food, the government would be blamed for that…Food supply is uninterrupted to her office from her son’s in-law’s house,’ she said.
Hasina wondered why 60 people were staying at Khaleda’s office.
In her 45-minute speech, Hasina referred to the list of 13 civil society men taking initiative for dialogue and said most of them were the former civil servants and had lobbied with her for promotion during her past rule.
Senior Awami League leaders including Amir Hossain Amu, Tofail Ahmed, Suranjit Sengupta, Matia Chowdhury, Sheikh Fazlul Karim Selim, Syed Ashraful Islam and senior journalist Rahat Khan, among others, addressed the programme.

Trying war crimes in Bangladesh: The trial of the birth of a nation