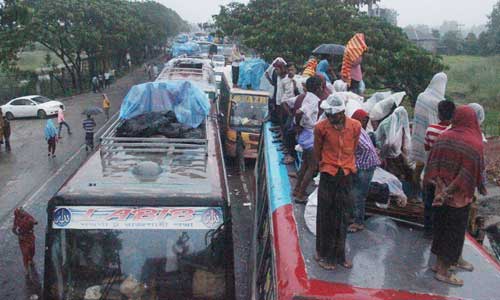 Thousands of Eid revellers have been making agonising journeys home as travel is taking much longer time on the highways due to huge tailbacks.
More home bound people are joining the streams every hour to meet their near and dear ones back home to celebrate Eid and have family reunions.
Long queues of traffic were reported on Dhaka-Tangail highway that stretched from Kaliakair to Joydevpur intersection in Gazipur, witnesses said.
Our Tangail correspondent reported the pace of traffic was very slow from Mirzapur to Natiapara due to heavy pressure of vehicles.
Our Munshiganj correspondent reported the queues of vehicles were stretching more with the passage of time in Shimulia pontoon to cross the river Padma.
The ferries are boarding 30 per cent less vehicles than usual as the pressure of coach passengers and other individuals were intense this time, a Bangladesh Inland Water Transport Corporation official said.
BIWTC manager in Shimulia, Abdul Alim, said the vehicles were carrying extra passengers and goods. That is why the ferries have to carry 30 per cent less vehicles in each trip.
Eighteen ferries were operating in Eid rush hours, he added.
Source: New Age

EC has nothing to do with record number of unopposed winners: CEC