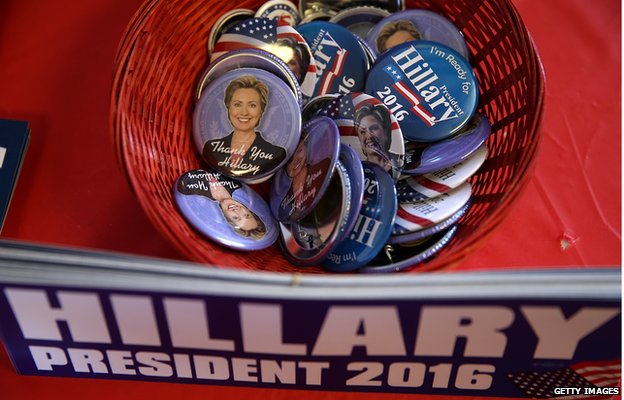 Hillary Clinton would be a “great president” if she decided to run for the White House in 2016, President Barack Obama has said.

He told ABC News Mrs Clinton was not “going to agree with me on everything”, which could be a welcome break for voters after his eight years in office.

She is expected to announce whether she will run again in the early 2015.

In the ABC interview, President Obama said he talked regularly with Mrs Clinton, describing her as a “friend”.

He said a number of possible Democratic contenders for the top job would do well, but Mrs Clinton was the only one he mentioned by name.

He said the wife of former President Bill Clinton would make a “formidable” and “great” president.

At the same time, he acknowledged that Mrs Clinton, who had served in his administration as secretary of state, might do things differently from him.

“One of the benefits of running for president is you can stake out your own positions, and have a clean slate, a fresh start.”

He also admitted that voters would want what he described as a “new car smell” in the 2016 elections, hinting that he may not have a high-profile role in the campaign.

Mrs Clinton played a prominent role in last month’s mid-term elections, in which the Republicans took control of the Senate.

For two months, she criss-crossed the country, campaigning hard to help Democrats in tight races, the BBC’s Kim Ghattas in Washington reports.

She and ex-President Bill Clinton were the surrogates every Democrat wanted while President Obama was spurned, our correspondent adds.

3 dead in US supermarket shooting