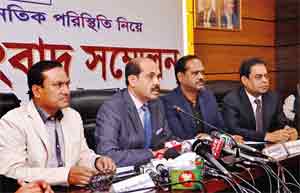 Leaders of the ready made garments sector feared the industry may be on the brink again from prolonged political crisis as the opposition called blockade and shutdowns are hitting the nation for over the last 12days.
Since there is no sign of a quick respite, fear looms large that a longer stand-off like
the one that the nation had witnessed during 2013 may create bigger problem for the garment sector affecting production, export shipments and clearing of imports to meet supply orders in time.
The industry has already lost over Tk 450 crore over the past 12 days, BGMEA president Atiqul Islam said at a press conference in the city last Monday while urging the government and the opposition to sort out the political discord.
Meanwhile, rural agricultural sector has become worst effected from disruption of transportation of vegetables to the capital and major cities. Consequently growers are selling their produce at throwaway prices while large part of their stocks are also facing root in the open ground in absence of buyers to carry them to cities. Their fate is now doomed in failing to recover production cost and make repayment of bank loan which they used to grow the vegetable in the field.
Moreover inter-district buses remained off the road in absence of passengers and also from fear of destruction of buses and trucks by arsonists on the highway. Even movement of fish to city markets hitting snags. Millers are failing to collect paddy to produce rice which may in turn hit the rice market.
Exports and imports through inland ports are facing severe setback. Railway schedules have almost collapse. Meanwhile, about a dozen covered vans and many more trucks loaded with garment merchandise to the port were burned on Dhaka-Chittagong highway.
A piloting locomotive now runs ahead of the express trains to ensure that the railway lines are in place at a time opposition activists are removing fish plates and knocking out bridges. Dhaka-Chittagong highways is also guarded by police escorts with running vehicles.
BGMEA president Atiqul Islam has therefore urged the political leaderships to find a solution to the ongoing political impasse as the nationwide transport blockade is causing them over Tk 40 crore daily in export loss for failing to place goods for timely export shipments. Over the last 12 days it lost over Tk 450 crore, he said on that account.
He urged the opposition leaders to keep the garment sector alive by helping to maintain the safe supply chain and ensuring congenial business climate.
He said during the 2013 political crisis which continued for few months, exporters paid 5,000 crore in airlifting of apparels to retain their buyers. Moreover, they have to offer Tk 9,000 crore in discount to foreign buyers for failing to reach the merchandise in time.
The industry will not be able to afford such setback again while the image loss that Bangladesh is not a good place for doing business may cause many buyers to withdraw their out-sourcing from here, he said
It will be a big blow again in the heel of the industry’s all out efforts to overcome the negative impact of Rana Plaza and Tazreen disasters, he said.
He said if the garment sector become affected again it may have collateral impact on banks, insurance, shipping, clearing and forwarding, tourism, hotels and transport sectors and their total impact to the economy would be manifold. He said it may ultimately become difficult to retain Bangladesh position as the second largest apparel exporter only next to China in the global market.
Atiqul Islam said garment export growth fell short by 4.88 percent over the past six months upto December 31 earning $12.02 billion as against $12.64 billion target. The new setback will be severe if the blockade continues. So there is no alternative to resolving the conflich through dialogue, he said.