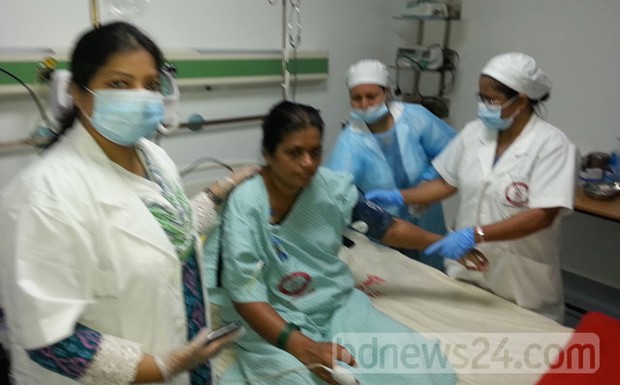 A 45-year-old mother has become the first woman in Bangladesh to have stem cell transfer at the first-ever bone marrow transplant centre at Dhaka Medical College and Hospital.

Prof MA Khan, in-charge of the centre who led the transplant team, told bdnews24.com that Farida Yeasmin was suffering from a kind of blood cancer called plasma cell leukaemia.

“The procedure has been successful,” he said, adding that the patient would have to stay at the hospital for another two to three weeks.

This is the fifth such case handled by the centre since its inauguration in March this year.

Yeasmin has one son and a daughter. Her husband, Shahjahan Ali, works in a private firm.

“It would have been difficult for us if we didn’t have the centre in Bangladesh,” Ali told bdnews24.com. His wife was diagnosed with cancer in last November.

The bone marrow transplant unit has opened “a new era” of medical opportunities in Bangladesh.

The health minister had said during the centre’s inauguration in March that over 11 percent of the total cancer patients suffer from blood cancer that affects the production and functioning of blood cells.

These patients have to go abroad and spend millions for such transplant.

It costs between Tk 200,000 to Tk 250,000 in the DMCH centre, where patients have to buy foreign drugs, and undergo sophisticated diagnostic tests not available at the hospital.

The government established the centre with the help of Boston’s Massachusetts General Hospital (MGH) and trained nurses and doctors.

The centre has five isolated cabins where as many patients can be treated at a time. But the doctors are going slow as Bangladesh does not have enough manpower for such delicate treatment.

Doctors call the current transplant procedure they are offering ‘autologous’, which uses the patient’s own bone marrow.

Stem cells are harvested from the patient and frozen while drugs are given to remove the cells that are causing the damage before transplanting them back.

The other procedure, allogeneic, in which bone marrow of siblings or donors is used, is more critical.

Prof Khan said every new centre in the world took time to start the allogenic procedure since it is more complicated.

“We’ll start once we become fully trained in this (autologous) procedure,” he said.

Boston’s MGH is still helping them with training and advice in every case.

Globally, it has been observed that about in 90 percent of cases the patient are fully cured after bone marrow transplant, Prof Khan said.