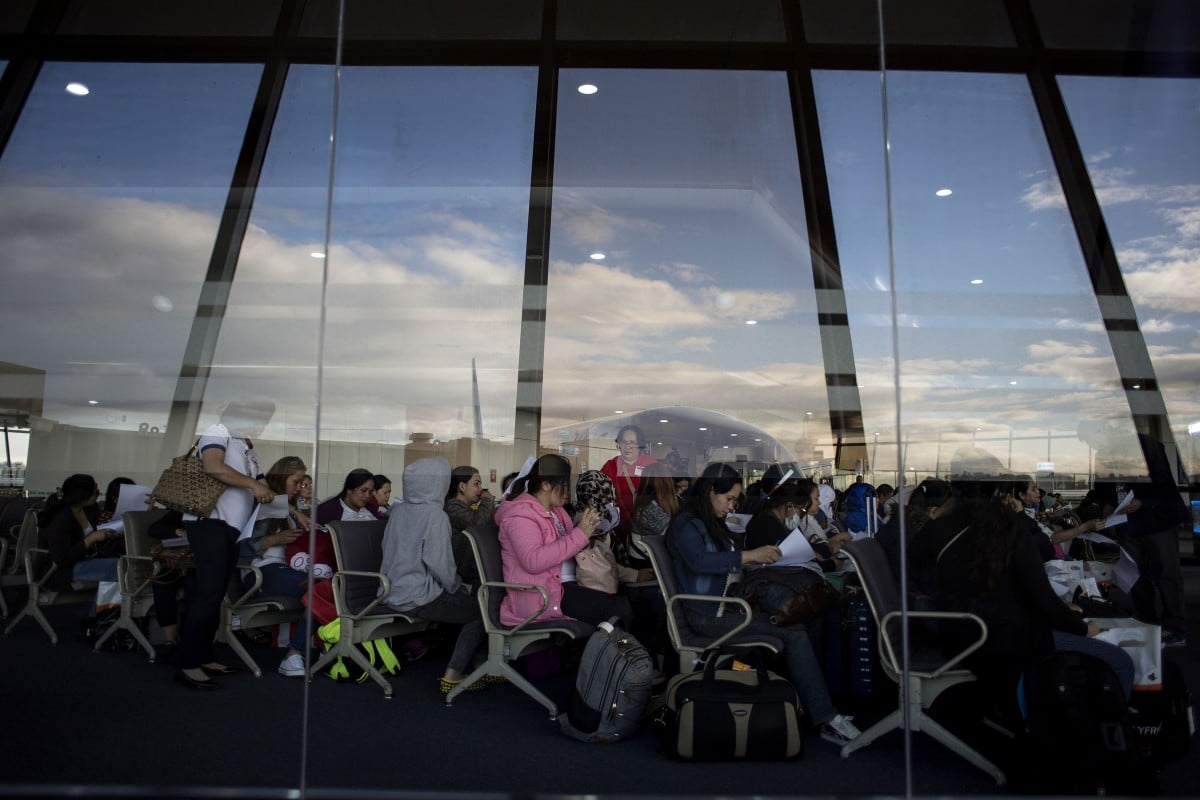 Middle East face an uphill battle to claim a rehabilitation cash grant offered by the government and start a new life to make up for lost foreign currency earnings.

Mary Ann Silva, 42, who is among a group of women that recently arrived in Manila after pre-terminating their work contracts, said she asked the Overseas Workers Welfare Administration (OWWA) how she could get the 20,000 pesos (US$392) grant for returning overseas Filipino workers (OFWs) under its Balik Pilipinas Balik Kabuhayan programme.

Silva said that those being evacuated now by the

Philippine government from conflict zones in the region are likely to face a similar quandary. The Southeast Asian nation is also bracing for an influx of returnees after Manila imposed a total ban on worker deployment to Kuwait following the alleged brutal killing of domestic helper Jeanelyn Villavende by her employers.

Silva and two of her friends – Joy Napuran, 26, and Isabel Antonette Bernabe, 32 – had failed to get a certification from the Philippine labour office in Riyadh, 400km away from Dammam city, where they were detained for over a month against their will by their Saudi employment agency after they complained against their harsh working conditions.

“From where we were detained in Dammam, our Saudi agency brought us directly to the airport for our flight to Manila. We were not given any chance to go to the Philippine labour office in Riyadh,” Napuran said. “Our biggest problem now is how to produce that certification to avail of the Balik Pilipinas grant.”

Generoso David, assistant vice-president at the Land Bank of the Philippines (LBP), said the government’s multibillion peso OFW Reintegration Programme has been in place since 2011 and it has been helping returning overseas Filipinos.

“Since 2011, we have extended about 1.2 billion pesos worth of livelihood loans to about 600 ex-overseas Filipinos who have opted to go home for good,” David said.

He said the bank is expected to be swamped with loan applications under the reintegration initiative as the government steps up its evacuation of citizens who wish to leave the strife-torn region.

Iraq and a hard place: for some Filipinos, leaving is not an option

Fearing a wider conflict in the region, which hosts up to 4 million Filipino workers, Labour Secretary Silvestre Bello announced that up to 1 million OFWs in the Middle East could be repatriated home using the country’s military assets, as well as chartered boats.

Many OFWs in conflict zones in Iraq and elsewhere in the region said they would rather take risks and continue working there while still able to do so. Bleak prospects of finding jobs back home that pay as much as what they earn in the Middle East have prompted many to decline the government’s offer to bring them home.

Filipino domestic helpers in Saudi Arabia and neighbouring countries in the region earn about 20,000 pesos monthly, while construction workers get up to 30,000 pesos. In sharp contrast, helpers in metropolitan Manila are only paid a government-prescribed minimum of 5,000 pesos, and construction workers receive between 12,000 to 15,000 pesos a month. Wage levels in other provinces are significantly lower than those in the capital. 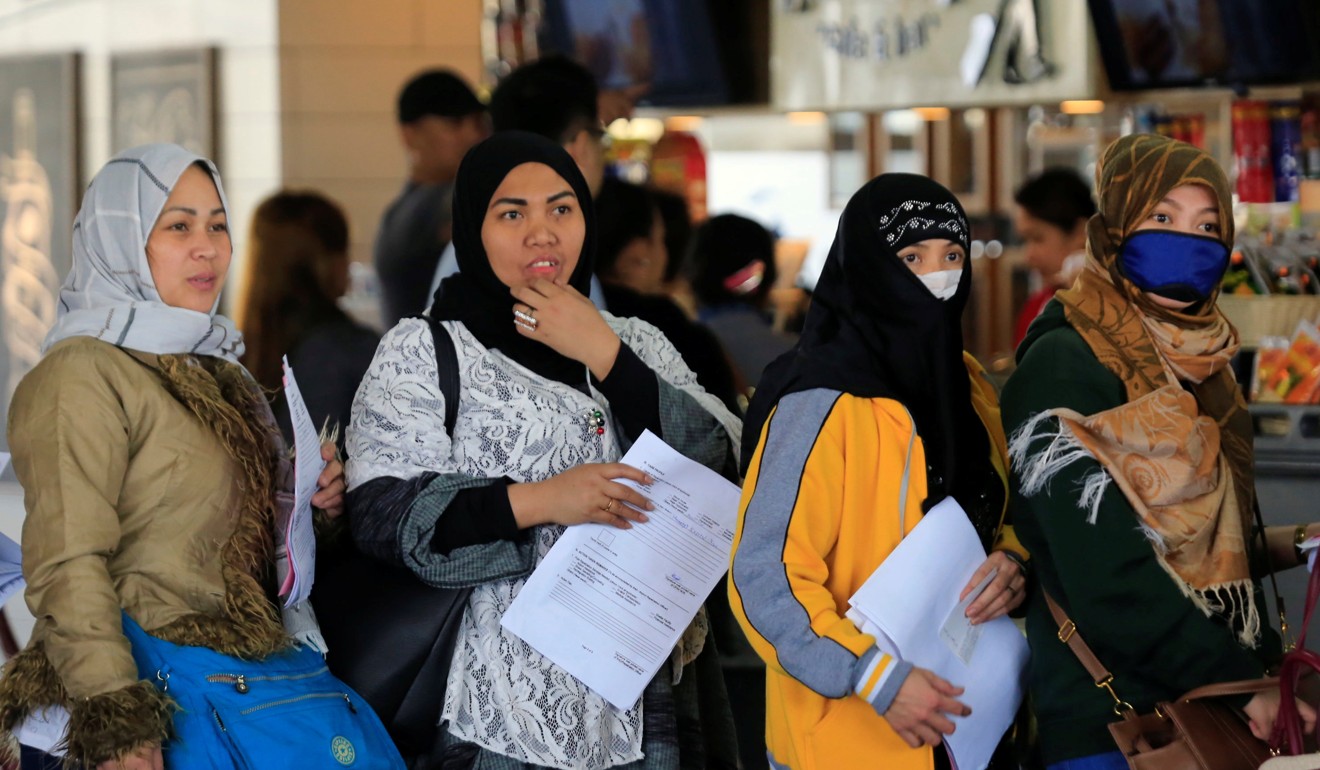 LBP’s David said government evacuation of OFWs could drive an increase in the number of returnees and bolster demand for the bank’s livelihood loans.

“If need be, we can easily increase LBP’s fund allocation for livelihood loans to accommodate returning overseas Filipinos,” he said.

However, David said that boosting the bank’s lending under the reintegration scheme would not necessarily be marked by a sharp spike in the number of borrowers.

The assistant vice-president explained that “qualified” borrowers are very much welcome to avail of LBP livelihood loans, but those who fail to match the bank’s lending criteria may be screened out.

“Our account officers need to screen carefully all borrower applicants to protect the integrity of our lending. If applicants have questionable or even bad credit records, it would be very hard to give them loans,” he said.

Ex-OFWs could apply for loans of up to 2 million pesos, but they need to present detailed business plans that could generate solid revenue and earnings.

“We prefer to lend to those engaged in franchised business because the franchiser would keep a close eye on them,” David said.

Silva said she found it too intimidating seeking a loan from the LBP under the reintegration initiative.

“All my friends who recently came back from Saudi Arabia, including myself, are unlikely to meet LBP’s high standards and strict lending guidelines,” she said.

Nida Napuran, 60, said her daughter Joy, who arrived from Saudi Arabia with eight others, might have little choice but to work overseas again.

“She’s a single mother and her children are still very young. Finding good-paying jobs here in Misamis Occidental [Mindanao] is very, very hard so I won’t be surprised if she goes abroad again,” she said.

This article appeared in the South China Morning Post print edition as: Domestic helpers in financial limbo after fleeing strife