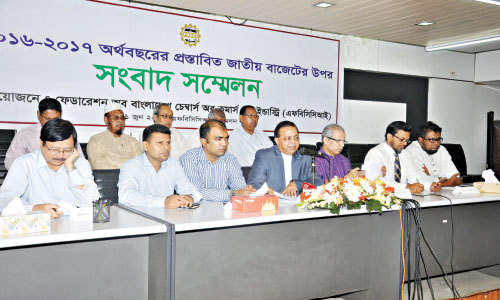 FBCCI president Abdul Matlub Ahmad on Saturday said he felt ashamed of the proposed national budget for the financial year 2016-17 as most of the recommendations made by the apex trade body for the budget were not incorporated in it.
At a post-budget press conference at the Federation of Bangladesh Chambers of Commerce and Industry office in Dhaka, he termed the proposed budget the most complicated ever and said ‘as the FBCCI president I feel ashamed as we spent four months with the National Board of Revenue discussing the budget but they (NBR) imposed unilateral decision on the business community’.
The FBCCI would place post-budget recommendations to the government for its reconsideration, Matlub said.
The businesspeople, he said, want to pay tax but it appears that NBR officials do not want to increase revenue income.
If the NBR takes unilateral decision on the national budget, there is no need to hold any dialogue with business community on the budget, he said.
‘We held dozens of meetings with the NBR and placed 447 proposals but only 11 per cent of our recommendations were included in the proposed budget,’ Matlub said.
‘Now we have to reconsider whether the FBCCI would attend any budget discussion with the NBR in future,’ he said adding, ‘Time has come for the NBR to follow right path.’
Demanding an online value-added tax system for eliminating taxpayers’ harassment, the FBCCI chief said that the government failed to introduce a simplified VAT collection system in last four years.
He said that although the finance minister had put off the implementation of the new VAT act for one year, he had made effective 95 per cent of the provisions of the act through budget proposals.
‘We demand a full implementation of VAT act by enacting a business- and tax-friendly VAT system,’ Matlub said.
He proposed turnover tax at the rate of 0.5 per cent for the retail traders and continuation of VAT exemption for handmade loaf, bun, similar kinds of bread and cake and biscuit valuing up to Tk 100 a kilogram, shoes and slipper made of rubber and plastic valuing up to Tk 120 a pair, locally-manufactured hard board and electric generator and fabrics woven by power loom.
The government on June 2 placed a mega budget before parliament without widening VAT net and tax net, Matlub said.
Thousands of people still remain out of the tax net but the NBR has no initiative to bring them under the net, he said.
The FBCCI president demanded a reduction in the tax at source for the readymade garment exporters to 0.60 per cent from the proposed 1.5 per cent and setting the corporate tax at 10 per cent for the sector.
He also demanded increasing of the tax-free income limit for individuals to Tk 3 lakh.
FBCCI first vice-president Md Shafiul Islam Mohiuddin was present, among others, at the press conference.