BangladeshPolitico has been sent a copy of a power point presentation that provides new information on what appears to be one part of the government’s proposed strategy of rigging the vote. Read here more generally about pre-vote rigging.

The presentation is titled: “How to win 11th Bangladesh General Election 2018: Strictly for Bangladesh Awami League.” BangladeshPolitico obtained a copy of the document from a source in Police Headquarters.

The information is contained in the final two slides of the presentation given to the Awami League government, probably before the formation of the National Unity Front, as it only refers to the BNP, and assumes an untroubled relationship with the Jatiya Party.

The rest of the slide presentation seems uncontentious polling analysis.

The two relevant slides – slide 32 and 33 – are both titled, “Strategy to each categories of Centre.”

The slides recommend that in those polling centres where the BNP is expected to win there should be a “Core AL Presiding Officer,” “Strict Policing,” and “Slow Casting”.

Presiding officers are assigned by the Election Commission and are supposed to be politically neutral.
“Strict policing” presumably refers to stopping opposition voters from coming to vote.
“Slow casting” refers to slowing down the numbers of people allowed to vote.

For those centres where a Jamaat-e-Islami candidate is expected to win, the slide recommends the same combination of actions but instead of “Strict Policing, it refers to “VVI Strict Policing”.

For those centres where the BNP or the Jammat could win, but they are marginal centres (“Marginal win by BNP/JI”) the slides recommends the following combination: “Core AL Presiding Officers”, “strict policing”, “Good team work of AL+JP”, and “Slow casting” 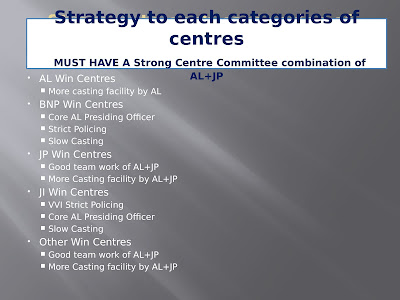 Full presentation can be downloaded from here