BNP standing committee member MK Anwar on Thursday castigated Home Minister Muhiuddin Khan Alamgir as he said Rana Plaza might have collapsed due to jerking of its vulnerable pillars by opposition activists.
“A highly educated minister like him has said this. How low will you stoop? Don’t stoop so low. People are putting shame on you. Quit power if you believe that BNP has such power. If we give you another shake, you’ll fall apart,” he said.
MK Anwar was speaking at a doa mahfil organsied by BNP to offer prayers for the victims of Savar tragedy.
In an interview with BBC, MK Alamgir said, “We were not sure whether the building collapsed due to shaking of its main gate and its broken portion by some hartal supporters. It’ll also be ascertained through the investigation,” he added.
The BNP-led 18-party alliance enforced a 36-hour nationwide shutdown on Tuesday that ended nearly two and a half hours ahead of its schedule on Wednesday following the Savar tragedy.
Anwar, in his speech, trashed the Home Minister’s remarks and blamed Prime Minister Sheikh Hasina and her party for the incident, saying, “The ruling party men in a planned way made the incident to happen.”
“Anti-hartal supporters had assembled there (the spot). The Prime Minister must shoulder the responsibility (for the tragic incident),” the BNP leader added.
“People will put you (ruling party men) on trial (for your involvement in the incident),” he told the Prime Minister.
The bureaucrat-turned politician said people are falling prey to deaths for the government’s wrong policies.
Source: UNB Connect 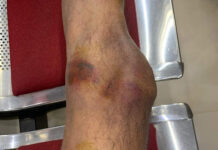 Police beat up two journalists for being outside