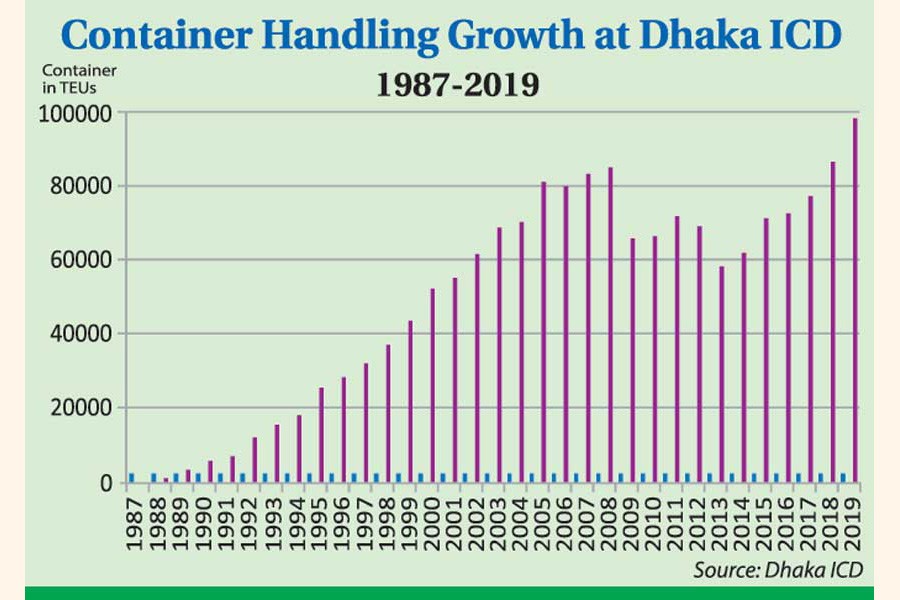 The Dhaka Inland Container Depot (ICD), the biggest container terminal in the country, has recorded container traffic of over 95,000 twenty-foot equivalent units (TEUs) in 2019, which is an all-time high, according to a statement of the ICD.

On the other hand, the Chittagong port, the prime sea port of the country, posted a 7.0 per cent growth in container handling last year, port sources said. The port usually registers a double-digit growth year on year.

The port handled around 3.1 million TEUs of containers, including import, export and empty ones, in the just-concluded year.

The record growth of containers in the Dhaka ICD is marked by a 13.61 per cent rise year on year.

People familiar with the development at the Dhaka ICD told the FE that this achievement was due to improvements in rail tracks between Dhaka and Chattogram.

The installation of double rail track between Dhaka and Chattogram Port is now in the final stage and will be complete in 2020. After completion, the growth of container traffic at Dhaka ICD will be higher, according to the Bangladesh Railway.

Some insiders say many containers bound for Chattogram are also released from Dhaka ICD, as it is believed that this arrangement is ‘favourable’ to importers who later carry the goods to Chattogram in lorries.

Located at Kamalapur, the ICD is owned by both Bangladesh Railway and the Chittagong Port Authority (CPA) as the former has provided the land and wagons for carrying the containers.

Ahmed Karim, terminal manager in-charge, told the FE, “The target we achieved in 2019 was set even more than 20 years ago and we are really proud of it.”

About handling of imported goods in the ICD that are actually meant for Chattogram-based importers, he said many containers carry goods destined for both Dhaka and Chattogram. So, those containers come here first.

He also said the volume of imported commercial goods and industrial raw materials carried by railway wagons on Chattogram Port-Dhaka route is on the rise.

Sk Farid, president of Dhaka Customs Clearing and Forwarding Agent Association, told the FE that importers find it easy to handle their goods though this ICD.

“Consignees can solve documentation problems fast in this ICD,” he added.

He also said the consignees can now receive their goods within two or three days of arrival of their goods at the Chittagong Port. Previously, it would take around two weeks to receive the goods.

In 1987, the then Ershad government introduced the inland terminal facility on the land of Kamalapur Railway Station in Dhaka.

Call to close down BTRC amid corruption claims