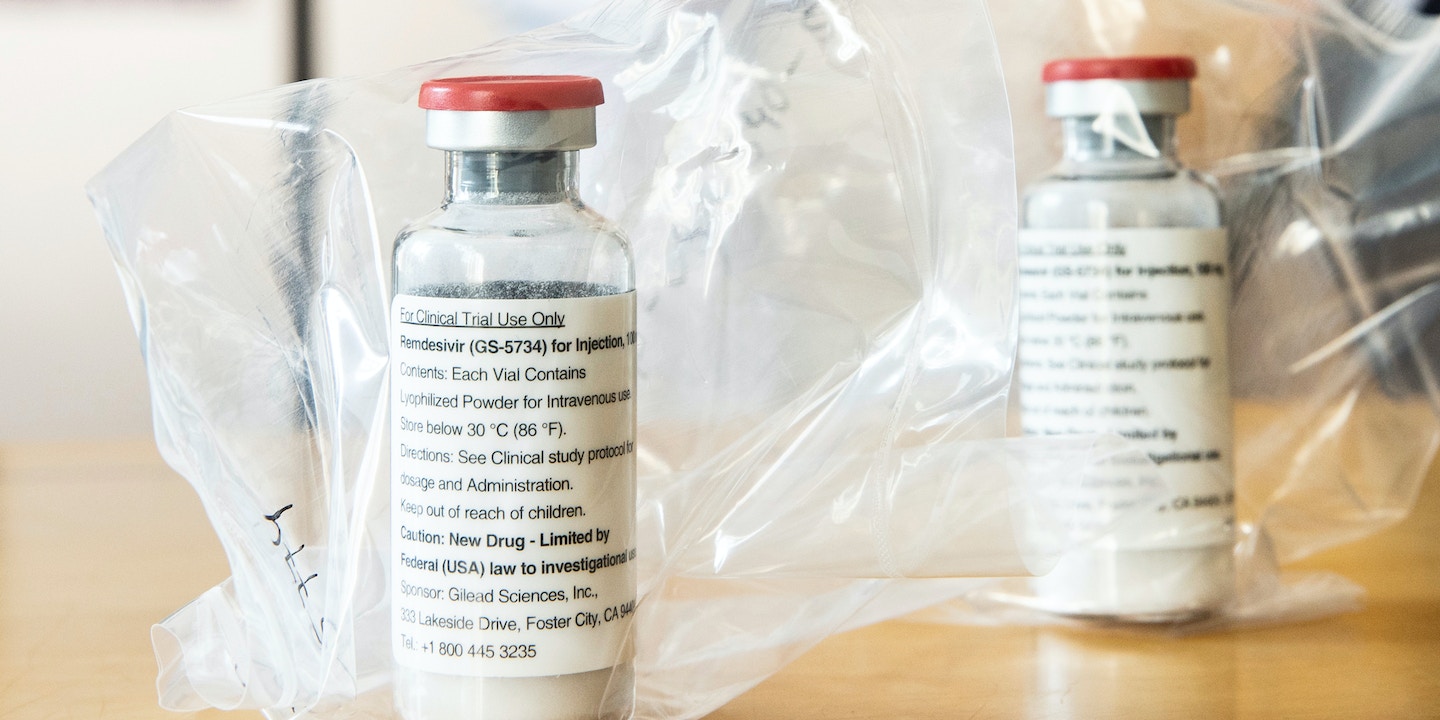 Remdesivir, an experimental antiviral drug made by Gilead Sciences, on the table during a press conference at the University Hospital Eppendorf on April 8, 2020, in Hamburg, Germany. Photo: Ulrich Perrey/picture-alliance/dpa/AP

Desperation for the limited supply of remdesivir is so great that Virginia will hold a lottery to determine which of the almost 1,500 severely ill patients in the state will be able to get its several hundred donated doses of the drug. In Minnesota, state officials have come up with an action plan to allocate their supply of the Covid-19 treatment, which calls for designating “triage officers” who will randomly choose among equally eligible patients. And in Alabama, physicians on a coronavirus task force set up by the governor will determine which patients get remdesivir.

Some hospitals there will receive just a single course of treatment. Still, Alabama’s state health officer, Dr. Scott Harris, recently offered his thanks to Gilead, the drug’s manufacturer, which donated some 940,000 vials of the drug to the federal government that are being distributed by state health departments. “Although the total supply of remdesivir is limited, we are grateful that hospitalized COVID-19 patients with severe disease in Alabama can receive this potentially lifesaving medication,” said Harris.

It is amid these feelings of scarcity and indebtedness that Gilead is setting the price for its antiviral medicine. The company, which has already arranged for distribution of remdesivir in 127 countries, is expected to begin selling it commercially as soon as June. And while a 10-day course of the drug, which was developed as a potential Ebola treatment with at least $79 million in U.S. government funding, costs only about $10 to produce, according to an estimate by the Institute for Clinical and Economic Review, its market price is expected to be several hundred times that amount.

Still, price gouging isn’t what has many scientists upset about remdesivir. It’s the fact that the coronavirus drug that has boosted hopes and sent Gilead’s stock price (and according to some analysts, the entire stock market) soaring doesn’t seem to do much for coronavirus patients.

“Remdesivir doesn’t work at all, as far as I can tell, or has only a minor effect,” said William Haseltine, a scientist who has spent decades studying viruses and helped lead the U.S. government response to the HIV/AIDS epidemic. “It is comparable to Tamiflu and maybe not even as good,” Haseltine added, referring to another antiviral drug that has been available by prescription for 20 years and is expected to be sold over the counter in the coming months.

Haseltine, who founded the divisions of biochemical pharmacology and human retrovirology at Harvard University’s School of Public Health, pointed out that Gilead hasn’t released data showing remdesivir’s effect on viral load in people with Covid-19. Meanwhile, the only available information on how the drug affects the amount of the coronavirus in patients, a Chinese study of the drug published in The Lancet, showed that the drug did not lower the viral load.

“That’s why I call it the fuzzy-wuzzy drug,” said Haseltine. “When the Chinese tried to find the antiviral effect, it wasn’t there.”

Instead, the excitement about remdesivir is based largely on a study sponsored by the National Institute of Allergy and Infectious Diseases that showed people taking the drug had a faster recovery than those who didn’t take it: 11 days on average compared to 15 for those taking a placebo. An article published on May 22 in the New England Journal of Medicine showed mild improvement in hospitalized patients that took remdesivir, though the drug didn’t appear to be of any help to the sickest patients, who needed to receive high-flow oxygen through ventilators or other means. Nor did the drug significantly improve a patient’s chance of surviving Covid-19.

Nevertheless, at an April 29 Oval Office press conference with President Donald Trump, NIAID Director Dr. Anthony Fauci declared that preliminary results from that trial proved that “a drug can block this virus.” Since then, remdesivir has been positioned as our savior and Gilead as its benevolent dispenser.

While some patients and their families have spent the past few weeks frantically trying to procure remdesivir, another Covid-19 treatment has been quietly been shown to be more effective. Although neither option appears to be the much-needed cure for Covid-19, a three-drug regimen offered a greater reduction in the time it took patients to recover than remdesivir did. People who took the combination of interferon beta-1b, lopinavir-ritonavir, and ribavirin got better in seven days as opposed to 12 days for those who didn’t take it. Critically, the treatment has another leg up on Gilead’s: It clearly reduced the amount of the coronavirus in patients who took it, according to a study published in The Lancet on May 8.

Yet so far there has been no stampede of patients demanding the new regimen or lotteries to mete out the doses, which may be due at least in part to the fact that the treatment hasn’t been the subject of a major marketing campaign. It’s worth noting that each of the three drugs in the new combination is generic, or no longer under patent, which means that no company stands to profit significantly from its use.

In contrast, Gilead, a company that had more than $22 billion of revenue in 2019 and stands to make money from remdesivir for many years, has been carefully orchestrating the rollout of its new treatment, doling out small, tailored bits of encouraging information to the press and highlighting its compassionate use program.

It’s not unusual for pharmaceutical companies to paint their products in a rosy light or go to questionable lengths to maximize profit. And Gilead, which secured a lucrative orphan drug status for remdesivir in March before reversing course two days later, has faced widespread criticism before — particularly for the exorbitant pricing of its HIV medicine Truvada and hepatitis C drug sofosbuvir, which sells for $1,000 a pill.

But during the pandemic, buzz, politics, and greed are playing an even greater role than usual in determining which drugs are widely used while the usual scientific process for evaluating their safety and effectiveness is being sped up and curtailed. Trump, who whipped up excitement about the malaria drug hydroxychloroquine, a drug he has taken himself despite not having Covid-19, has led the way.

“You have a president putting intense pressure on companies, regulators, and others in an effort to salvage his reelection,” said Dr. Michael Carome, director of health research at Public Citizen. The consequences, Carome warmed, could be deadly. “My great worry is that with all this hype and the press from the White House, that we’ll bring something to market much too quickly and harm a lot of people. That’s the danger.”

Already, the risk of death has been shown to be elevated in Covid-19 patients who take hydroxychloroquine. According to a study published in The Lancet last week, the approximately 15,000 people who received hydroxychloroquine or the closely related drug chloroquine were roughly twice as likely to die as those who didn’t take them.

The benefits of all drugs have to be balanced against their harms. In the case of remdesivir, those dangers appear to include possible damage to the kidney and liver. While the risks and benefits are typically clarified with further study, the NIAID called off the remdesivir trial that might have offered more information about both so that the patients who were getting the placebo could take the drug.

In addition to possibly hurting patients, basing decisions about coronavirus therapies and vaccines on hype rather than science also carries the risk of prematurely investing in one product at the expense of another. “It’s possible that we’re now investing a lot of effort in pursuing a drug that could lead to less research being done on something that could have been safer or more effective,” Carome said about what he described as questionable enthusiasm for remdesivir. After the drug received Emergency Use Authorization from the Food and Drug Administration on May 1, Public Citizen submitted a FOIA request for the complete data underlying the decision. The FDA has not provided the group with any documents and usually treats such data as proprietary.

Meanwhile, the excitement around another coronavirus development seems to be moving faster than the science. Last week, the biotech company Moderna also moved markets with a vague announcement about the preliminary results of a study. In this case, the company described initial findings of a trial of its potential coronavirus vaccine as “triumphant,” though they were based on eight people from a relatively early stage of research.

“Most products that pass this phase ultimately fail,” said Public Citizen’s Carome. While the company summarized its data, it didn’t release it. “We need to see the details, but we probably won’t.” Share Your Coronavirus StoryClick here to learn about contacting a reporter securely, or email us at coronavirus@theintercept.com

The vaccine development process promises to get faster and more vulnerable to conflicts of interest. On May 14, Trump announced Operation Warp Speed, the administration’s effort to produce and distribute a coronavirus vaccine by the end of the year, despite experts’ insistence that the process will likely take years. The operation is being led by former pharmaceutical executive Moncef Slaoui, who has received more than $13.5 million from pharmaceutical and biotech firms since 2016. Slaoui was also holding 155,000 shares of Moderna, whose value increased by more than $2 million after the good news about its vaccine hit the airwaves. In an unusual arrangement, the compensation for his government work is only $1 and is exempt from the usual federal disclosure and conflict-of-interest laws. After Sen. Elizabeth Warren called attention to his conflict of interest, Slaoui divested his shares in Moderna and announced that he would donate to cancer research the money he made off their increase after he joined Operation Warp Speed.

While vaccination may be the best hope to bring an end to the pandemic as quickly as possible, mistakes made because of haste or conflicts of interest could be devastating. Because the plan is to vaccinate some 1 billion people worldwide, even infrequent side effects could manifest on a huge scale. The wrong vaccines could even spread disease. “They could give you a nasty cold that you could give to unvaccinated people,” said Haseltine.

The current power of politics and greed over science make such outcomes more likely. “I fear that the warp speed group will distort our regulatory process and that the administration will put its thumb on the scale to favor an outcome regardless of the cost to human life,” said Haseltine. “People think warp means very fast, but warp also means distorting.” Natural journalist “mother of the wind” and one Cesar’s story