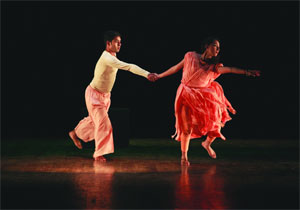 Inaugurated by Philip Kueppers, Director, Goethe-Institut Bangladesh, the show, an  initiative of the Young Choreographer’s Platform  Project briefly introduced to audience by the artistic director of the show, a German dancer and choreographer Tomas Bünger.
The brief opening session was followed by some 100 minutes of performances that saw the audience, fullest to its capacity of the National Theatre, magnetized by the show. Each of the choreographers performed their own piece and only with their movements, they were telling their own stories. It was breathtaking to watch how Tahnun Ahmedy was visualizing the struggles of the Bengali farmworkers, how Sudeshna Swayamprabha was reflecting the disparity between man and woman in contemporary Bangladesh, and how Snata Shahrin was telling the story of sexual harassment.
Full of color and music, surprises and emotions, the performances rendered the expressive power in contemporary dance.
The show was the end result of the “Young Choreographers Platform Project 2016” initiated by Goethe-Institut Bangladesh for young and promising local choreographers to exhibit their talents. Since January 2016, seven young choreographers, Md. Farhad Ahmed, Lamia Saiyara Mela, Parvin Sultana Kolly, Shammy Akter, Snata Shahrin, Sudeshna Swayamprabha and Tahnun Ahmedy have been working under the guidance of Tomas Bünger and creating their own choreographies on contemporary dance. They were well supported by Technical Director Faiz Zahir, Artistic Assistant Director, to the Rezwan Pervez, and for costume design by Surovi Roy. After three hard-working phases of workshop, the young choreographers presented their own choreographies depicting their ideas of contemporary Bangladesh.